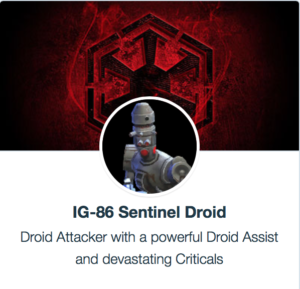 Today’s toon to review mods for is the Droid Attacker IG-86. A common member of the Phase 2 team for many on the AAT or Heroic AAT because of his droid synergy under a HK-47 lead, IG-86 was a regular in the Arena in early 2016.

Main Focus: Critical Chance. Speed is typically the mainstay in the “Main Focus” paragraph, however most use IG-86 under a HK-47 lead. Under HK-47 he gains 30% CC and gains 50% turn meter for each critical hit, so getting him over 50% CC means that he will score critical hits 80% of the time or more. Thus, while speed is good, gaining 50% TM on 4 of 5 hits will really have him attacking over and over again. After you get the CC numbers in the 50-60% range make him hit hard – details on that are below.

Additional Areas to Focus: Critical Damage, Speed, Offense and survivability. If you’re going to invest into IG-86’s CC being over 50% you might as well get him as close to the max 216% Critical Damage as you can. If you have him and the others on the Phase 2 AAT/HAAT team up to Gear 11 with good speed, a consistent 1 million points (or more) each time is your reward. If the speed and gear are not in line you can still do nice damage, but for the big numbers you need the big CC/CD numbers. Any additional offense boost is a plus since we know that offense directly impacts Critical Chance and Critical Damage stats as well. Speed is important, but not as essential with IG-86 under a HK-47 lead given your best speed mods are likely on IG-88 and Jawa Engineer in this group. Finally, survivability is important to ensure IG-86 stays alive to land the big hits. Not running IG-86 in the AAT/HAAT? These mods translate well in the Galactic War and Arena as well.

Once upon a time, IG-86 was a regular in the Arena before the Wiggs and Zeta Maul metas, and while many ignored droids at first, the addition of the Tank Takedown raid (AAT/HAAT) was a breath of new life into the 3 FTP droids. In order to maximize IG-86’s effectiveness, getting the right sets of mods is important. I would prefer the mix below to ensure IG-86 has high CC, max CD and good speed.