After receiving news of an Ewok Faction Pass upgrading the abilities of each of the four existing Ewoks earlier this week, the update came in a SWGoH Client Update this evening. While Teebo did not get an update, Chief Chirpa, Ewok Scout and Ewok Elder each did receive enhancements. 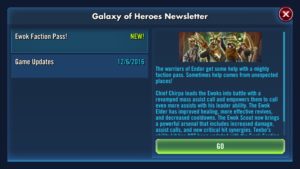 My initial thought is that this sounds like the First Order under Phasma – more attacks. While it is a nice advantage to have if you are running a First Order team with a 60% chance to assist, it certainly is not one of the Best SWGoH Zeta upgrades in my opinion.

For the remainder of the update notes, check them out on the SWGoH forums at EA.com.

Rumors continue to make the rounds that two new Ewoks will be added soon – Paploo and Logray. Missing from that list is, of course, the most famous Ewok of all – Wicket W. Warrick. One rumor stated that an Ewok event will lead into the SWGoH’s newly-announced Territory Battles, but like all rumors, we will have to wait and see if there is any legitimacy behind it.

SWGoH: Should I Buy the Forest Ambush Pack?