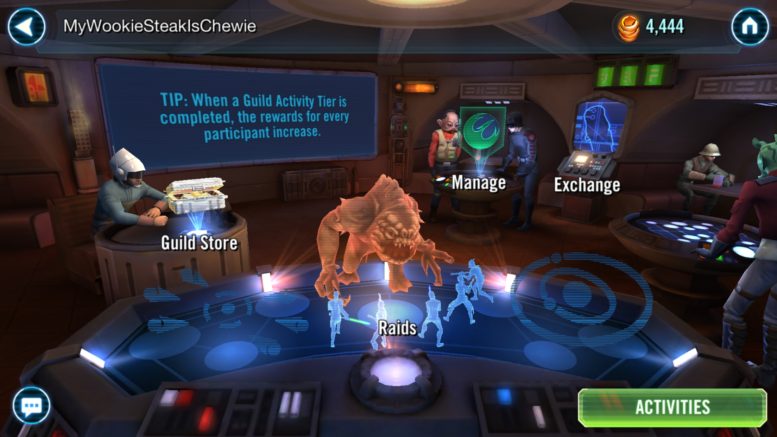 Guilds. One of the most interesting parts of Star Wars Galaxy of Heroes. (Hopefully) 50 members all coming together as a team to complete a mission, or a Raid in the current version of SWGoH. My goal in this SWGoH 101 piece is to help you better understand all areas of a Guild in SWGoH. From the Guild Exchange and the Guild Store to daily Guild Activities, the more you understand about the info below, the better teammate you will be moving forward. 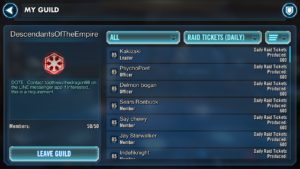 If you go to the Guilds screen (all the way to the left of the home screen) you have access to Guild data. While much of this data remains bugged, you can get a general idea of who is and is not active in your Guild. See who is producing Raid Tickets toward helping launch the Rancor or AAT Raids, how many Donations from the Guild Exchange have been made by each member (see Guild Exchange below), check on player Activity, Rank, Arena Power and more. This is also where you can Leave Guild to go elsewhere. In addition, Guild Officers and the Leader can Invite Allies, see which invites are pending and the Leader can even Disband the Guild. 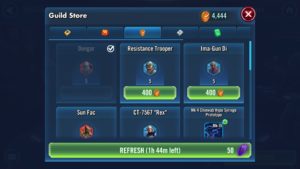 The Guild Store is one of the many areas where you can buy resources in Star Wars Galaxy of Heroes. It features character shards and a variety of gear pieces using the tokens/currency you earn in the daily Guild Activities and in Raids. While you do keep your Guild Tokens when switching Guilds, you cannot access the Guild Store unless you are in a Guild. Character shards available in the Guild Store include Jawa Engineer, Sabine Wren, Rey, Luke Skywalker, Ima-Gun Di, Sun Fac, Commander Cody, Rex, Zam Wesell, Dengar and more. Nine gear items are available with two rotating each refresh. 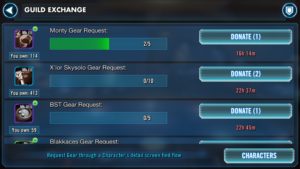 The Guild Exchange is where you and your Guild members can show your commitment to teamwork by requesting and donating gear to each other. While farming gear you can click “Request” on specific gear items which are capped at 2, 5 or 10 pieces allowed to be donated to you in a 24 hour period. When looking to donate to others in your Guild, you are once again capped to 1 or 2 items max on how much you can donate to each individual in a 24 hour period, but there is no cap on how many total donations you can make to your teammates in a day. While the Guild Exchange is often overlooked by many, it is a fantastic way to invest into your teammates and benefit your team’s needs in the long-term. 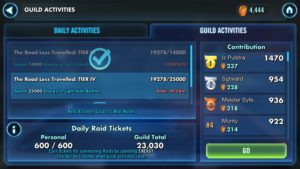 Be the first to comment on "SWGoH 101: Guilds, the Guild Exchange, the Guild Store & Guild Activities"