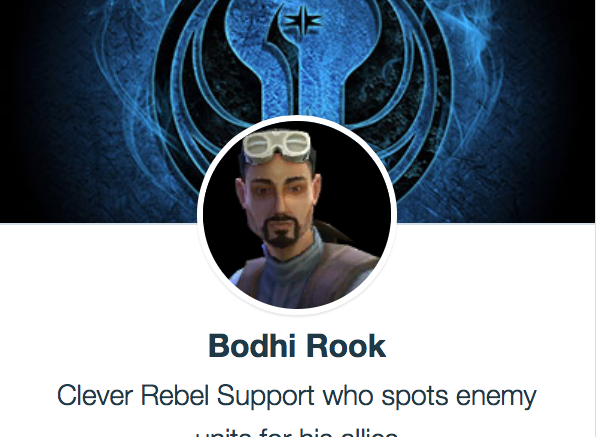 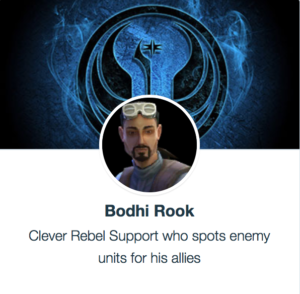 Today’s toon to review mods for will be Bodhi Rook. A Rebel support who had a sizable part in Rogue One, Bodhi was a defected Empire Cargo Pilot who, ironically enough, does not pilot a ship in Star Wars Galaxy of Heroes. Made available for free in SWGoH to celebrate the launch of Rogue One on DVD, Bodhi has an unimpressive kit in the game and never really got much love or play. However, with Territory Battles requiring Rogue One toons (why is that not yet a faction?) in specific missions, some may need to use Bodhi in battles since he is an easy farm in the Galactic War Store (although K-2SO is a better choice to farm first!). Let’s take a look a at the best mods for Bodhi Rook.

Main Focus: Potency is the key for Bodhi, and while I am not a huge fan of either character the ability to also grant Potency Up to a target ally has me eager to use him with Bistan more. Those two, maxed, have potential to do very well together. Both Bodhi’s basic and special attacks are bolstered by his potency, so be sure to give it a nice boost.

Additional Areas to Focus: Speed and survivability. Speed is the constant in SWGoH no matter the character, but I have no reason to suggest using your top Potency mods with high Speed secondaries on Bodhi. Thus, put 6 Potency mods on him with a focus on some small Speed secondary boosts and survivability in the forms of health, protection and defense and make sure he is at 7-stars for Territory Battles – Hoth Platoons.

I am choosing to go with 6 Potency mods – three sets of two – to gain as much as Potency as possible with a focus on speed and survivability. Here is my preferred mod setup for Bodhi Rook: