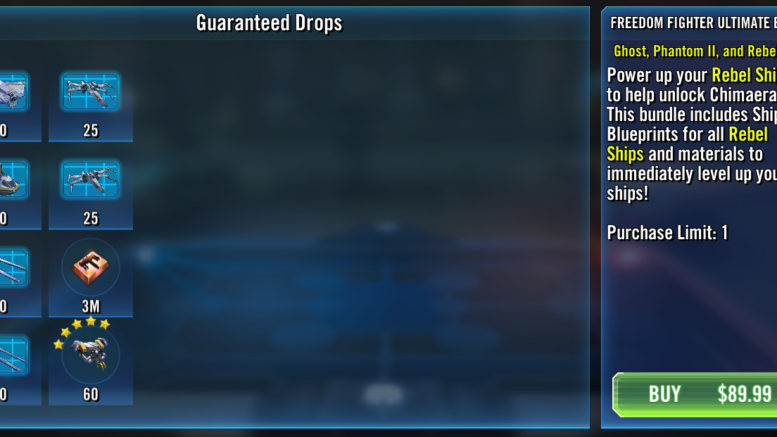 Our SWGoH Should I Buy series continues by reviewing the Freedom Fighter Ultimate and Reinforcements Bundles.

Ships have been getting a lot of focus lately and we’re likely to continue seeing more focus in the coming weeks. Grand Admiral Thrawn‘s Chimaera Capital Ship is on the horizon and will require Rebel ships to acquire him and would also work best with a number of Empire ships to battle under him, which leads us to two of the bundles currently offered to attain both. 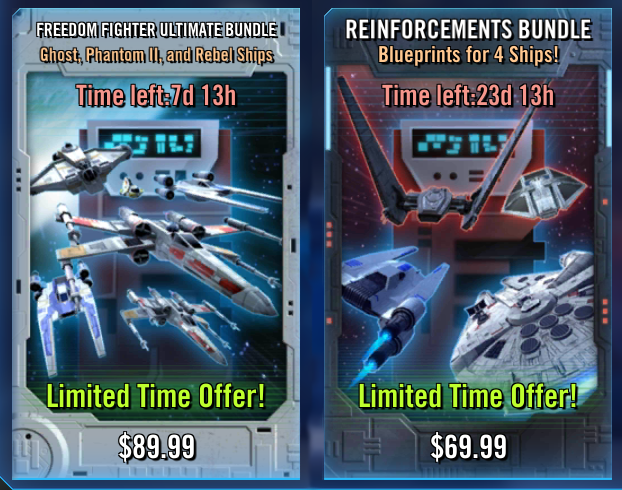 The Freedom Fighter Ultimate Bundle is $89.99 USD, runs through the next week, and provides the following:

The Reinforcement Bundle is $69.99 USD, runs through the next three weeks, and offers the following:

At nearly $90 USD the Freedom Fighter Ultimate Bundle ranks among the most expensive bundles in the game, but also provides the most proverbial bang for the buck.

There are only 6 total ships with the Rebel tag in the game and the Freedom Fighter Bundle gives players enough shards to unlock each of them. The bundle also places players who are keen on acquiring Thrawn’s Chimaera will be in a good position to complete the remaining farming needed to get all the Rebel ships up to 5*. Players who are looking to expand their fleets could also benefit from the bundle by unlocking several more difficult to acquire ships in one step.

Where the bundle lacks, however, is that the price only unlocks the provided ships and there is no accompanying set of packs with the individual ships. With Chimaera requiring five Rebel ships and a capital ship at 5* each to unlock at 5*, a player starting with zero Rebel ships unlocked has a fair amount of farming to do in order to acquire Chimaera, and there is no guarantee that a player could start from nothing and gain Chimaera by the end of the event even with this bundle. Also, players who may have Wedge or Biggs’ ships at high stars, or even 4/6 total Rebel ships at high stars, could see some frustration at the idea of purchasing a bundle that is the only guaranteed method of acquiring those last needed shards. All this notwithstanding, this bundle could easily bump a player who is somewhere around 5/65 of each Rebel ship to 5* and land them capable of at least unlocking Chimaera. These five ships unlocked could also help take a player to a higher rank in the Fleet Arena.

The other bundle currently available is the Reinforcements Bundle which features shards for some of the strongest and also rarest ships in the game.

Aside from offering shards for both light and dark side ships, the biggest difference with the Reinforcements Bundle is the number of shards provided. Three of the four ships offered in the bundle unlock with 80 shards, while one requires 50 shards. The bundle, however, only offers 30 shards a piece for each of the ships, which means that players will still need to do a bit of farming to actually unlock each of these ships: 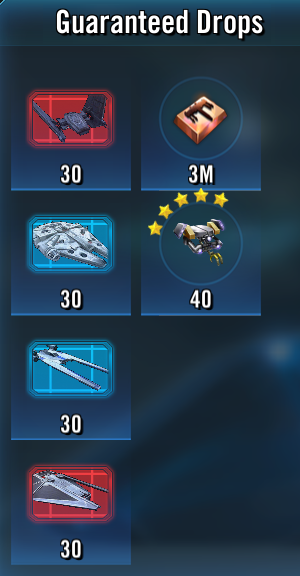 The Reinforcements Bundle seems to be designed more to aid players with their farming efforts than to enable players to unlock and go from a single bundle. Something to keep in mind with regard to this bundle is that two of the farmable nodes are notoriously difficult to complete at 3* and each of the ships require multiple pilots that must all be unlock in order to use the ship.

While all of the above characters are farmable, several on nodes that are very difficult to complete, and players could easily find themselves in a position where the ships are unlocked, but the pilots are not, rendering the ships useless.

Either bundle can open a lot of options for players. The Freedom Fighter Ultimate Bundle can help players increase their rosters while also aid in gaining Thrawn’s Chimaera and the Reinforcements Bundle can give players a head start on farming strong and, thus far, difficult to acquire ships to gain and maintain the higher ranks in Fleet Arena which now offer crystals. The costs of the bundles should be weighed, but it looks like players could see some real benefits from either or both.