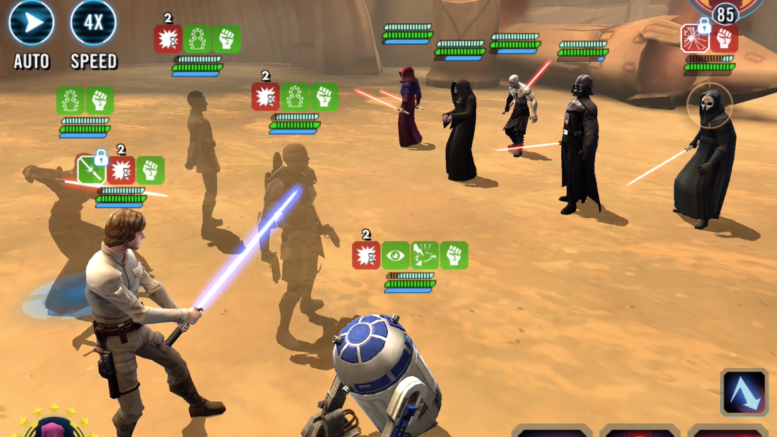 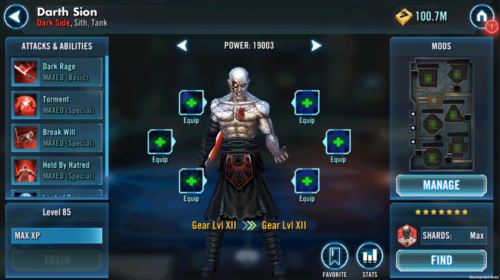 Darth Sion, unveiled to Gaming-fans.com Director of Content LJ and the other SWGoH GameChangers during our trip to the EA Capital Games studio in February 2018, was one of the many reason that February is referred to by this Website as The Month of the Sith. While the initial version of this mod guide was based on Darth Sion’s kit alone and the limited gameplay by LJ at the event, we have adjusted the info since Sion became a mainstay in the Arena and after the launch of Mods 2.0.

Let’s take a look at our recommendations on the best areas of focus for Darth Sion’s mods.

Main Focus: Speed is always important, but Darth Sion’s kit is quite unique. Thus, the main areas of focus should be both Potency and Speed. Potency is necessary for Sion to land his unique Pain debuff which can be applied from the use of Dark Rage, Torment and Break Will. In addition, the use of the basic, Dark Rage, on a target with Pain already on them will dispel any debuffs on Darth Sion, so putting that little red skull icon over the heads of your opponents is critical. Speed is a major focus for obvious reasons – we want to get his turns to come up more quickly and frequently so that his kit can be used most effectively and so that we can get him to use Held By Hatred as soon as possible.

Additional Areas to Focus: Offense, Critical Chance, Critical Damage & survivability. Offense, CC and CD are areas of focus to make Darth Sion hit harder. When he has the Hatred buff, Sion will have +25% Critical Chance, so increasing the CD is just logical here. I tend to lean toward the use of Offense mods for Sion as long as the secondary stats are very good to great in an effort to make sure all hits are stronger, not just the critical ones. Finally do not ignore survivability in all forms – Health, Protection and Defense. Darth Sion already has +100% Defense against enemies with Pain as well as when he has his unique Hatred buff. Use of the Held by Hatred special regains 100% Health and with the boosts from the Mods 2.0 update in August 2018, the value of both Health and Defense are high and should be a focus ahead of Protection.

Note: Like many characters, Darth Sion’s mods depend on how you plan to use him on your roster. If you want to have him as a super tank, focus on the survivability, but note that this guide is geared toward a balanced blend of enhancements of his existing strengths.

Darth Sion has an awesome kit that can put him in line with the META if enhanced properly. For the most effective us of the Darth Sion in SWGoH, I recommend a set of 4 Offense mods and 2 Defense mods based on your available mod inventory.

Offense + Healt/Defense or Potency as you put in the square and the circle?

4 offense mods and 2 potency mods with the secondary stats being key.

Does the amount of dots the mod has determine the primary & secondary abilities, or is it just random? I’ve completed all mod battles & challenges so it’d be great to know where to go.

Primary abilities are based on the mod shape – squares are always offense, diamonds are defense, circles health or protection on the primary stat.

[…] Traya, unveiled with Darth Sion to Gaming-fans.com to myself and the other SWGoH GameChangers during our trip to the EA Capital […]