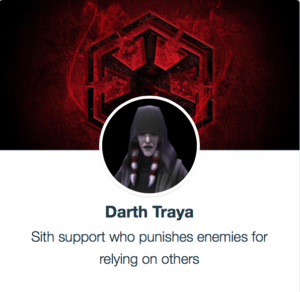 Darth Traya, unveiled with Darth Sion to Gaming-fans.com to myself and the other SWGoH GameChangers during our trip to the EA Capital Games studios in February 2018, was one of the many reason that February is referred to by this Website as The Month of the Sith. I have had the chance to test out Darth Traya on my QA/dev account both with and without mods, and I have to say that I am impressed, and I was fortunate enough to have her opened on my personal account in early June 2018. Without mods on Traya, I found her leadership (maxed) to not only be great, but dominant. In Squad Arena battles I was able to destroy RJT teams and I continue to test extensively against other Sith teams to get a better feel for what most players will experience in the Arena after unlocking and gearing her. What I have found is that any non-Traya team should be rather easy to defeat with Traya on your squad. However other teams with Darth Traya, such as those in the Squad Arena, will continue to be tricky and take practice.

Let’s take a look at our recommendations on the best areas of focus for Darth Traya’s mods.

Main Focus: Speed is one option, but a tanky Darth Traya can be a pain as well. Survivability in the form of Health works very well for her leader ability, Compassion is Weakness, where Sith allies gain 10% Health upon a debuffed enemy taking damage. Survivability in the form of Health may be even more valuable as her Lord of Betrayal unique sees Traya gain +4% Bonus Protection which stacks until the end of her next turn whenever an ally suffers a debuff, and Bonus Protection is based off of Max Health. Since she remains a leader in almost every use of Traya in the game today (Territory Wars, Grand Arena, etc.) boosting stats that improve her Leader ability is wise.

Additional Areas to Focus: Potency, Offense, Speed & Tenacity. Potency helps Darth Traya’s basic and her Saber Storm special attack both land debuffs, while Offense ensures she will hit even harder. If you are going for the tanky Darth Traya you’re not going to want a ton of Speed and instead add more Tenacity so that she can avoid being debuffed.

In-game Mod Recommendations: The devs tell us that Offense and Critical Chance are the way to go with Darth Traya. Almost always on a team that includes Darth Nihilus and Darth Sion, I feel like Traya’s role is more than just that of an attacker as this would suggest. In fact, in Traya’s Relic upgrade stats, she gains significant survivability (Health, Armor, Resistance and Crit Avoidance) along with Special Damage and Special Accuracy as the only offensive stats, so this does not really seem to coincide.

Be the first to comment on "SWGoH: Best Mods for Darth Traya"