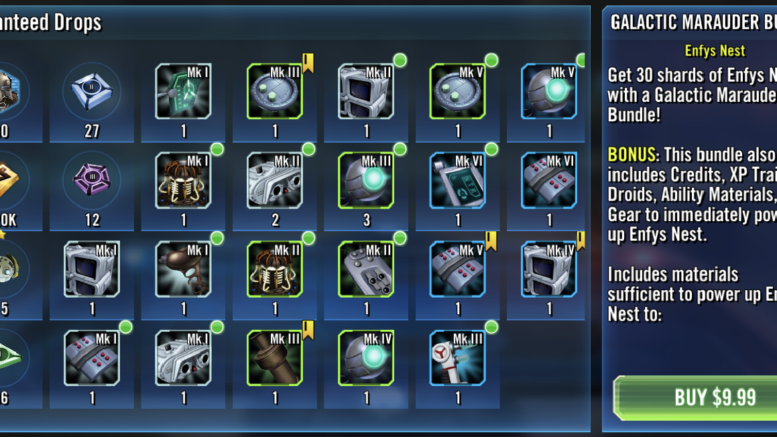 Our SWGoH Should I Buy series continues with a review of the Galactic Marauder Bundle and Pack.

Solo: A Star Wars Story has arrived and brings with it several new characters to SWGoH. One of the most notable of these characters is Enfys Nest, who comes with her own bundle and pack. 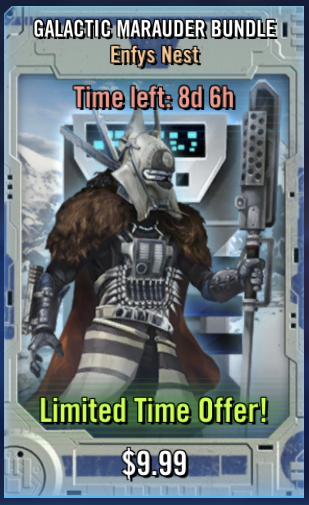 The Galactic Marauder Bundle is $9.99 USD and offers 30 Enfys Nest shards as well as some credits and gear. This bundle ofers enough to take a 3* Enfys Nest to 4* without the need for further purchase. This extra star makes starring Enfys Nest much easier in the time it takes for her to become fully farmable. The $10 bundles are generally considered a good one-time deal, especially for players who might have missed the original Marquee Event available for Enfys Nest, or for those seeking the greater power that comes with the additional star.

The Galactic Marauder Packs offer anywhere from 5-330 shards of Enfys Nest at 1299 crystals per pull. There is no limit to the number of pulls possible per day. As with all packs, the results will be variable. 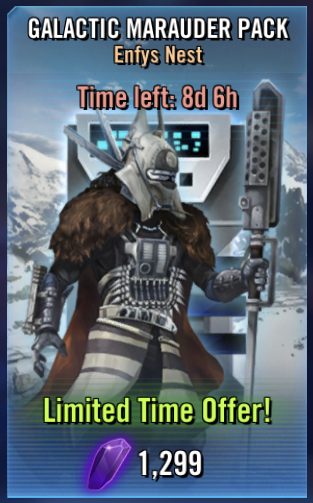 On average, attempting to gain a 7* Enfys Nest through the Galactic Marauder Packs will require about 25-35 pulls. At 1299 crystals per pull, players should expect to spend anywhere from 32,500-45,000 crystals to get Enfys Nest to 7*. This can be pricey depending on daily Arena rank and current crystal stockpile, but players accustomed to spending will find that this pack runs in line with recent Marquee Packs.

It is always ultimately up to every player to decide whether a character is worth an upfront cost and, with most Should I Buy articles, we provide facts and numbers and let players make their decision based solely on that. Enfys Nest, however, has proven to be an extraordinary character and further pros and cons should be considered.

Pros: The Ability Kit. Enfys Nest’s kit is, by far, one of the most useful and powerful seen in a marquee character in quite some time. 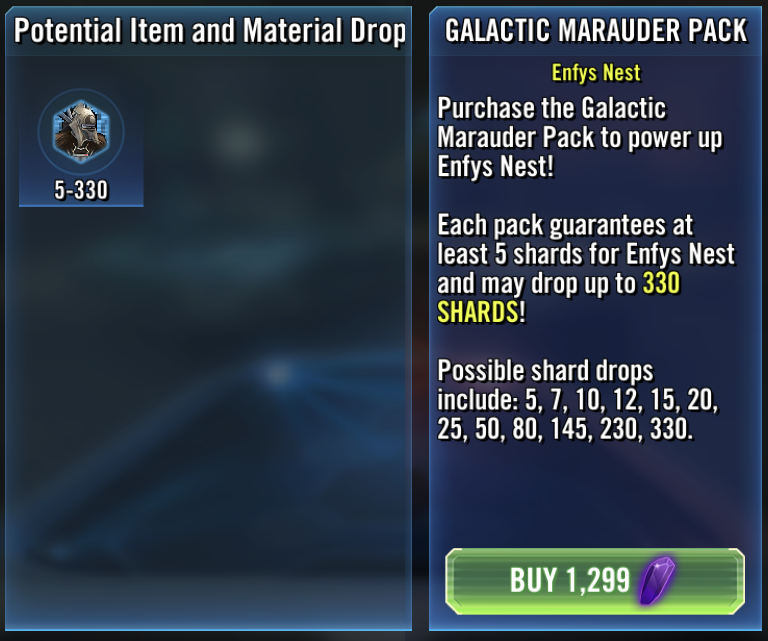 Cut Through (Basic): Provides unresistable Expose and also Dispels any “Defensive” buffs. Enfys Nest’s Basic ability can’t be Dodged, so it gives an automatic Expose, and the Basic ability Dispels. While the Dispel only removes “Defensive” buffs, these particular buffs are all those that are most useful to remove: Defense, Health, Protection, Evasion, and Tenacity Up; Taunt, Stealth, Foresight, Heal Over Time, and Crit Immunity. Her Basic ability alone gives her an edge against teams that run depend on buffs like R2-D2’s Stealth or General Kenobi’s Crit Immunity.

Sudden Impact (Special): Delivers Stun for 1 turn (with omega), Buff Immunity for 3 turns, and if the target had any Protection, the attack delivers 50% more damage. The attack also ignores Armor, which means she “reduces” a character’s ability to block or reduce the damage she delivers. In short, she’s going to hit extremely hard with this attack.

Kinetite Charge (Special): Delivers AoE damage with Stun for 2 turns. Enfys Nest also removes 20% Turn Meter from each enemy with full Health and she gains 40% Turn Meter from each enemy with less than full Health (with omega). This means that whether this attack is used on her first turn where everyone has full health, or later in the battle when Protection has been whittled and a few toons have less than full Health, Nest will be gaining or removing Turn Meter, getting to go far more often. 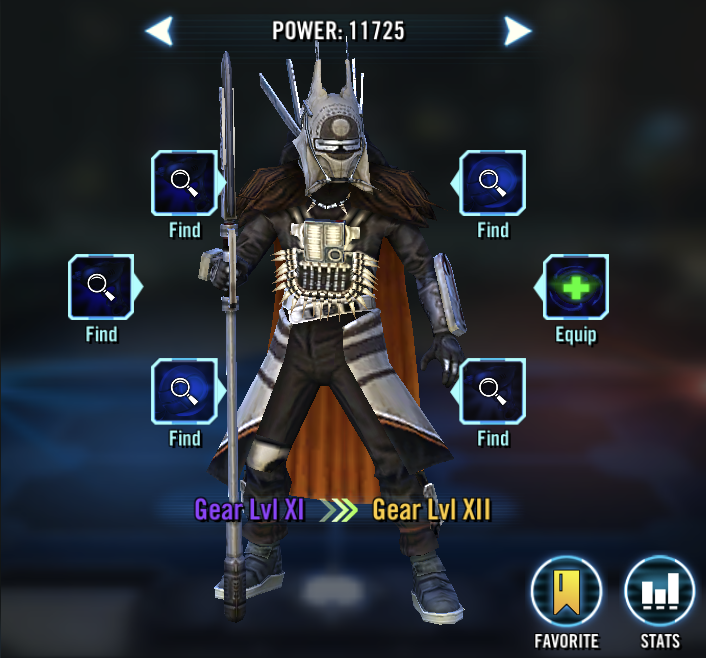 Fighting Instinct (Unique): At Ability Level 7, Enfys Nest’s Unique gives her 80% Counter Chance, which is great on its own, but additionally, each time she is damaged, Nest will gain 30% Crit Chance and 40% “Bonus” Protection. This Bonus Protection is extremely valuable because it’s not a buff like Protection Up that can be removed and used against her from characters that gain Turn Meter, etc. from enemy buffs. Nest will also gain 2% stacking Crit Damage whenever an enemy loses a buff or debuff. To make Nest’s Unique even better is that with a zeta, she can ignore Taunt and she also gains 2% stacking Health Steal just like she gains Crit Damage.

Enfys Nest’s kit makes her incredibly durable, given that she gains Protection that can’t be Dispelled and only increases each time she is attacked. What’s also beneficial about her phenomenal kit is that none of her abilities are specific to her Light Side Scoundrel faction, which means Nest is entirely plug-and-play. Nest can easily fit into a team of Sith, Empire, Rebels, Resistance, anything. On a team with a pre or auto-taunter like Darth Sion, Baze Malbus, or Shoretrooper, players will not be able to focus on taking out Nest as early as possible, which just makes her extremely difficult to kill later in the battle. On a Resistance team, she adds further Expose and, then with her high Counter Chance, players can run Nest just about anywhere else given that when she Counters, she’s also going to Dispel the majority of available Buffs.

In short, Enfys Nest is an incredible character that will work wonders on many teams and in many scenarios.

Stars and Viability:
Like all fully plug-and-play, kit-dependent characters, Enfys Nest is fully Arena viable at 3* Gear 11, meaning that without spending anything on her, players have a wonderful character to use right from the start. There is no real need to purchase the bundle or the packs to have Nest at higher shards since she is already great even at 3*.

That said, a 3* Enfys Nest will not hit quite as hard as a 7* Enfys Nest, she will have lower heath at 3*, and, between Raids and Territory Battles, a 3* character may not be of as much use to many players. 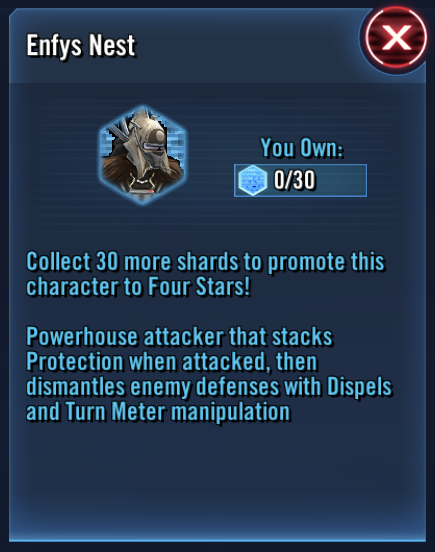 Price and Availability:
Getting Enfys Nest at more than 3* before she becomes fully farmable is not a cheap endeavor. To get her to 7*, players can expect to pay for the $10 bundle and the equivalent of 3 full Vaults of Crystals, which can come to around $300 USD for a single character up front.

Deciding her full worth, however, can be tricky. A 7* G12 Enfys Nest can mean the difference between bouncing in and out of Top 50 Arena ranking daily versus staying within Top 5 daily. A 7* Enfys Nest will be a powerhouse in all three raids, she will be extremely useful in Light Side Territory Battles, and a terror to face in Territory Wars. The crystals spent upfront can have long-lasting effects on total crystal and gear “income” for several months ahead of other players.

That said, waiting just a few weeks after the bundle and pack expire will allow Enfys Nest to move into the Shipments and her shards will be available for anywhere from 320 crystals for 4 shards to 1280 crystals for 16 shards. At around 39K crystals spent for a 7* Enfys Nest through the packs, her shards come to around 138 crystals per shard from 3* to 7*. Waiting for Nest to come to the Shipments brings her shards down to around 80 crystals to per shard. All this notwithstanding, even with “cheaper” shards after several weeks, it will still take at least another month or so to fully farm the character in this manner, which could mean the difference in loads of crystals and gear in the meanwhile.

Enfys Nest is an incredible character and the decision to buy may not be easy for many. Unlike many bundles and packs seen in the past, however, starring Enfys Nest can alter the depths of a player’s game experience in multiple ways. She’s not cheap by far, but the best things rarely are. Happy playing!