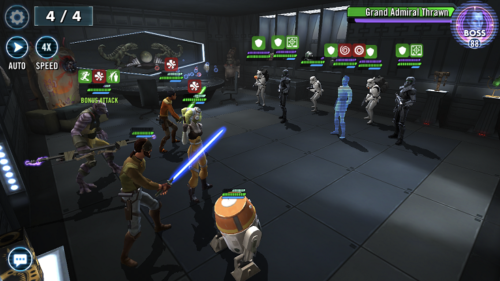 One of the best defensive Jedi characters in Star Wars Galaxy of Heroes, Kanan Jarrus was released in-game in April 2017. A member of the Jedi, Rebel and Phoenix factions, Kanan got a mini-rework in October 2017 (just before the start of the final season of Star Wars Rebels) which added a Zeta Ability and significantly improved defense as a result. 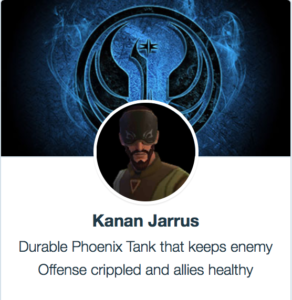 While the Phoenix Squadron started off as completely FTP, the need for them in the Grand Admiral Thrawn legendary event to unlock and upgrade him, and later in Territory Battles: Rebel Assault sparked some heated debate and strong opinions about SWGoH. However much of that has been forgotten as the game has continued to grow and evolve.

Kanan’s Zeta is on his special attack, Total Defense, which was already able to dispel debuffs from himself. However the addition of the Zeta adds the following: “Dispel all debuffs on Phoenix allies and grant them Defense Up for 3 turns, grant Kanan and target ally Foresight for 2 turns, and when each of these Foresights expire Kanan gains 100% Turn Meter and other Phoenix allies gain 50% Turn Meter.” In a nutshell, Kanan can clear all debuffs from his Phoenix allies, grant Foresight to a select ally and grant significant turn meter to gain extra attacks.

PvP (Squad Arena & Territory Wars): The value of the Phoenix Rebels has continued to change since the start of the Territory Wars feature in-game, but many high-end guilds still use the Phoenix Squadron in their back few rows of defense. Without a Zeta on multiple Phoenix characters, the value of this team on defense is much lower of course, but a Gear 12 Phoenix team with 2-3+ Zetas can be very tough to stop. In the Squad Arena, the Phoenix toons have no place in the Summer/Fall 2018 META, with the exception of Ezra Bridger on Bastila-led Jedi teams, but I am sure many earlier players utilize the entire Phoenix squad to remain competitive at lower ranks.

PvE (Raids & Territory Battles): The area where Kanan’s Zeta shines the brightest is likely Phase 2 of the Sith Triumvirate Raid against Darth Sion. Using a full Phoenix squad (minus Chopper), this team is able to put 1-2 million damage up against Sion and his minions, and the Kanan Jarrus Zeta is the first choice on this team in terms of priority of which character to apply the Zeta to first (Sabine Wren is the second choice). His Zeta not only dispels non-locked debuffs, but I typically apply the Foresight to Sabine to improve her survivability, then when Kanan’s turn comes back around I then have him taunt to allow the other four to attack while he absorbs the blows from Darth Sion and the Sith Marauders.

In the Rancor Raid and AAT/HAAT the Zeta is sure to be helpful as well, but it is not really relevant to endgame players in Galaxy of Heroes. While regenerating Protection and Survivability is the team’s strength, they are not a Turn Meter removal team and as a result will not perform as well as other character combinations against the Rancor, and the damage output is not significant enough for the AAT/HAAT in today’s Raid META.

My Rating of zKanan Jarrus: A Zeta on Kanan Jarrus is not a game changer, but it is what I would call a very good Zeta use. I used to save my Zetas for Legendary and above characters, but as Star Wars Galaxy of Heroes has evolved it is necessary to use them on other toons in the game as well to remain competitive in all areas of the game as I feel I must. For the Heroic Sith Raid, if you plan to use a Phoenix team in Phase 2 the Zeta on Kanan is an absolute must and it is very helpful in Territory Battles, but in other areas of the game it is more of a nice to have. As a result I give Kanan’s Zeta a 7 on a scale of 1 to 10, my highest rating of all of the Phoenix characters.

thank you for this review. As the rest of your posts

[…] this team is able to put 1-2 million damage up against Sion and his minions, and while the Kanan Jarrus Zeta is the first choice on this team in terms of priority, the value of Hera’s Zeta cannot be […]