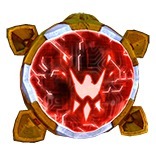 Starting at Level 1 it reads “Flames surround you, dealing _% of your damage every second to targets in melee range” with the percent of damage increasing upon each level up.

So who are the best bots for the Megatronus Prime Core? This Prime Core produces an elemental flame that surrounds the bot dealing a percentage of your DPS every second to targets in proximity. The area of exposure for this core is slightly greater than melee range. The higher the level of the core the greater damage percentage inflicted on enemy defenses in proximity. On offense, Megatronus, much like Alchemist, is a great core for leveling individual bots. As a bot progresses beyond L50, reaching each next level becomes ever increasingly difficult from a required XP perspective. At some point, the only reasonable way to progress is by playing the fewest number of bots in the highest zone possible. What Megatronus (and Alchemist) allow you do is potentially solo or duo (two bots) in battle zone 11/12 by attaching this Prime Core to Deathsaurus/Star Saber/Lugnut/Elita-1 and rush the HQ. Because of the additional damage provided by Megatronus, a L55 Deathsaurus/Star Saber/Lugnut/Elita-1 with ability level 8+ can easily solo zone 11. In a normal triple XP weekend event, this would provide roughly 28k (56k with gold XP core) of XP per battle for Deathsaurus/Star Saber. If you ran two bots in zone 11, in this scenario, both bots would receive 14k in XP (assuming triple XP; no XP core on second bot). This allows you to quickly acquire XP for purposes of bot leveling.

Megatronus is not effective on all bots though. It is optimal to attach Megatronus on melee range bots. Bots with short (most aerials), medium (Galvatron/Ultra Magnus) and long (gunners) will normally inflict little to no damage given the proximity they are from most targets.

So far I have described the Megatronus core usefulness in terms of individual bots or leveling. Depending on the strategy, Megatronus is very useful and possibly critical to backdoor attacks. Many backdoor attacks rely on Deathsaurus/Star Saber/Lugnut/Elita-1 to clear defenses in a specific area around the HQ so that Dead End/Kup/Astrotrain/Springer have few remaining defenses to contend with. Megatronus provides the extra damage to allow Deathsaurus/Star Saber/Lugnut/Elita-1 to destroy those defenses.