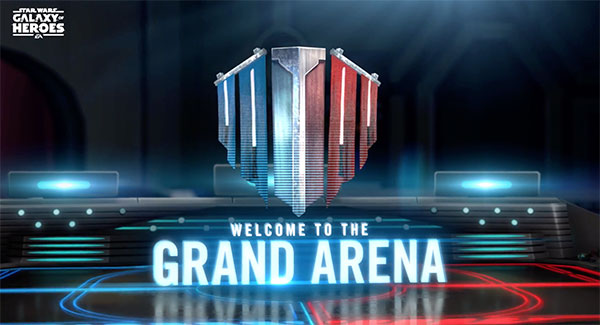 12.23.19 Update – Gaming-fans.com is adding to our staff and expanding our content. Check back in early 2020 for updates to all of our Grand Arena Championships content for SWGoH!

Hello there! Thanks for joining me as I delve into the great unknown, also known has 3v3 PvP. As I’m writing this right before the first 3v3 version of Grand Arena is about to start, I have to warn you that most of this article consists of pure speculation. I did get the chance to test out how my CLS team held up against various offensive trios with my shardmate (thanks Bola Bola) but other than that this is all just theoretical, just like any other content out there.

I will start by offering a trio of strategies as I think is only fitting after which I will list what I believe will be the strongest teams, along with connotations.

Strategy: Just like in the 5v5 variant, this game mode will be all about balancing an efficient offense with a sturdy defense. Strategies focusing on going all-in on either one are doomed to fail. As the rewards for this upcoming GA are quite flat I believe it will be more about just having fun rather than a serious competition and as such, I have devised three strategies so you can pick one that fits your desired playstyle.

Low effort: Just save every playable team you have for offense. Send in those Jawas, Droids and other leftovers to hold the fort and hopefully your opponent underestimates some of them or just didn’t leave himself enough playable teams to use. Your win condition will be efficiency, so try to win every battle on the first try and with full health and ideally protection.

Medium effort: Make a list of all the possible teams you can muster up. Save the best 6-11 (depending on your bracket) for offense and put the next best ones on defense. Again be prepared for a double full clear and try to win on efficiency.

High effort: Study your opponent’s roster. Identify his S-tier teams as I will discuss below and save counters for those. Then put your 6-11 strongest teams on defense, putting the strongest ones in front.

S-tier: These teams have very few counters, mostly just other S-tier teams. They are fantastic on defense but you might have to save some to defeat the opponent’s best teams.

Darth Traya, Darth Sion, Darth Nihilus
The triumvirate itself I believe can only be reliably beaten by Revan, CLS and Magmatrooper teams. If your opponent doesn’t have a decent Magmatrooper, go ahead and put this beast on defense.

Jedi Knight Revan, Grand Master Yoda, Jolee Bindo
Opinions differ wildly about this team. Even though it’s quite a bit weaker than its 5-man version because of Revan’s passive bonuses for each Jedi and Old Republic ally as well as his ability to call all allies to assist, I still struggle to see what can really beat this efficiently. I believe Traya and CLS can both get the job done, but JTR might be the best choice.

Commander Luke Skywalker, Chewbacca, Han Solo
Another powerhouse, this team has very few answers. As the only team that I actually had the chance to test, I can confidently say that General Kenobi is key in beating this team either under Rex lead accompanied by the Wampa or under Bastila lead accompanied by Grand Master Yoda (but another Jedi might also get the job done).

Qi’ra, L3-37, Enfys Nest
Honestly I’m not sure what can take out this trio, other than the S-tier teams. Let your opponent figure it out!

Rey (Jedi Training), BB-8, R2-D2
Last and I have to say least of the S-tier teams, this one has neither amazing damage output like CLS, nor amazing toughness and inevitability like Traya. It can be taken out by Rex, Wampa and various combinations of Nightsisters, whether it’s the Nute, Zombie, Acolyte team or anything involving Mother Talzin.

Carth & Old Republic Scoundrels
As the newness of 2019 starts to wear off this team becomes more of a normal site for high-end players. Usually consisting of Carth Onasi and his Zeta lead with Mission Vao and Zaalbar, others like Juhani or T3-M4 could make an appearance on rosters that have not geared Mission and Big Z, but we highly recommend you use the Carth/Mission/Zaalbar combo.

A-tier: These teams are very strong but can be taken down in many ways but will still make up the bulk of your defense. Quantity is an important factor here as the player with the most A-grade teams will likely win.

Bastila Shan, Aayla Secura, Hermit Yoda
A great team with one big weakness that keeps it out of S-tier: Tanks. Whether you use Talzin, Zombie or Palpatine, Sith Trooper to name a few, this team shouldn’t pose big problems on defense but will be able to take almost anything on offense.

Emperor Palpatine, Bastila Shan (Fallen), Sith Trooper
Another great team that should work against almost anything. Its main weakness I believe are enemies that can ignore tanks, such as any members of the Fett family (no this doesn’t include clones!). It’s also easily dealt with by anyone using buff immunity.

Mother Talzin, Asajj Ventress, Old Daka
A bit of a gamble to play your high-value Nightsisters without Nightsister Zombie but I believe this trio can pull it off. Kill Daka and she gets brought back to double stun on every basic or kill Mother Talzin and she just gets resurrected by Daka. There is no clean way to deal with this team.

Bossk, Dengar, Boba Fett
A fearsome pack of defenders with its biggest weakness being lack of cleanse other than Bossk’s self-cleanse and lack of turn meter control.

Jango Fett, Cad Bane, Embo
A very strong offensive trio. Their ability to circumvent tanks and even protection to a degree makes them great to keep for offense. This might be one of very few teams that can beat Qi’ra.

Kylo Ren (Unmasked), Kylo Ren, First Order Stormtrooper
It doesn’t get much tougher than these guys, the textbook version of a defense team.

Captain Phasma, First Order Executioner, First Order Officer
Even though they have lunch together with the team above, these guys go a separate way when they walk out the mess. Once you get to the offense section in the textbook mentioned above, you’ll find a picture of this trio. Their squishiness makes them unfit for defending but their damage output is almost unparalleled.

CT-7567 “Rex”, Wampa, Visas Marr
The third spot in this team is highly flexible depending on what you’re facing as this team is best used on offense. General Kenobi and Sun Fac are good candidates but there are plenty of others.

Grand Admiral Thrawn, Magmatrooper, Death Trooper
The silver bullet to the Triumvirate. Save them for this specific reason.

Finn, Poe Dameron, Resistance Trooper
As long as Poe is first to act, this team can take out anything out there. Be wary of high tenacity teams like Bossk and the fact that this team can fall apart with some bad RNG on Poe’s first turn. The 5-man version is notorious for fumbling when Poe only hits one expose. In 3v3 this is much more likely to happen.

B-tier: These teams can be tackled in so many ways they are best used on offense, with a few exceptions.

General Veers, Captain Starck, Range Trooper
Being reduced in numbers is a hard hit for the troopers. Save these guys for offense, ideally against a team with a weak link.

Wedge Antilles, Biggs Darklighter, Scarif Rebel Pathfiner
The kings of 2016 have fallen to mediocrity but are still pretty solid on either offense or defense. Third spot is flexible.

Admiral Ackbar, Princess Leia, C-3PO
The synergy in this team is off the charts. Thanks to Ackbar’s +25 speed buff, C-3PO will easily be the first to take a turn in most matchups. Calling either Ackbar or Leia to assist will likely fill them up to 100% turn meter and depending on RNG you can probably get Leia to attack 3-4 times before the opponent has a chance to act. I look forward to trying this team out!

Chief Chirpa, Paploo, Wicket
How best to split up the Ewoks is the big question here. I believe this will be the toughest sleuth to put on defense.

Teebo, Ewok Elder, Logray
These guys’ main tools are turn meter reduction and daze so pick an opponent that’s weak to these effects and grind them down slowly, very slowly.

Hera Syndula, Chopper, Ezra Bridger
I don’t think this is the best version of a Phoenix trio but I do think these are the most commonly geared ones. A filler defensive team.

Darth Maul, Savage Oppress, Sith Assassin
Zeta’d up the main strength of this team is going first. Its weakness is tanks.

Darth Vader, Darth Sidious, Shore Trooper
Aaaand last but most definitely not last. This powerful team might prove to be A-tier worthy both on offense and defense. Zeta’d up Qui Gon Jin might be the best answer to deal with one of these if you encounter them.

Thanks for reading and best of luck out there in the Grand Arena!

SWGoH: The Grand Arena is Here!

Be the first to comment on "The Grand Arena: 3v3 Teams & Strategy"