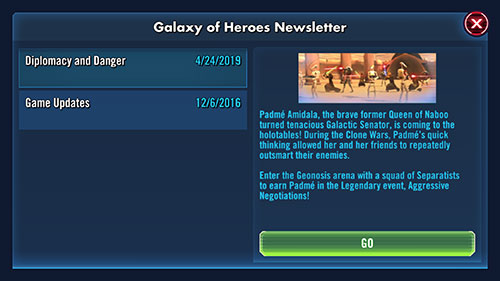 News has hit the Star Wars Galaxy of Heroes forums announcing that Padmé Amidala was coming to the game, but not in the manner that most had thought. Instead of being a ROLO-style character earned through Territory Battles, Padmé was instead announced as the prize in a new SWGoH Legendary Event called Aggressive Negotiations.

The in-game message and forum post both say “Enter the Geonosis arena with a squad of Separatists to earn Padmé in this arduous Legendary event, Aggressive Negotiations!”

What is not clear from this is which Separatists will be needed to unlock Padmé. Capital Games has often had different units needed to clear each Tier of battles, but whether or not the two newest Separatist Droids will be required for Tiers 5, 6 or 7 is unclear. Knowing the typical timeline of an announcement like this, expect the Aggressive Negotiations to start on or around May the 4th.

Be the first to comment on "SWGoH: Separatists required to unlock Padmé Amidala in new Legendary Event"