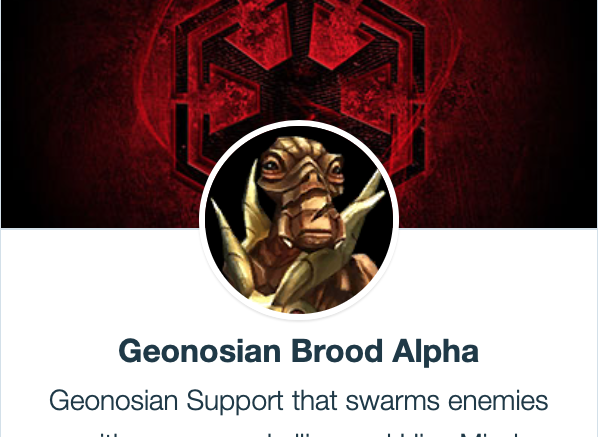 Welcome to the Geonosian Brood Alpha – the latest article in our series about the popular game Star Wars Galaxy of Heroes where we take a look at the best mods for each SWGoH character. While I do not claim to have all of the answers in this game, I do my research and have used every toon I write about extensively. These are mod recommendations and they are certainly not the only option. However we look to help players maximize their characters in SWGoH and we are always open to feedback if you have a mod setup that works well for your gameplay. 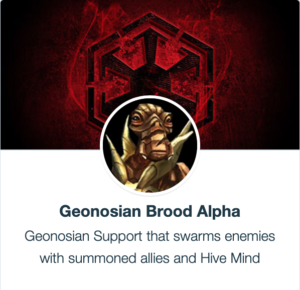 Main Focus: Health. Looking over Geonosian Brood Alpha’s kit his strengths are his leadership ability, his high base Health stat and his Queen’s Will unique. Since you have to keep GBA alive to gain the benefits of the Queen’s Will unique and the Hive Mind buff, and given his 51,021 base Health is 3rd highest of all non-Galactic Legend characters in the game and 7th highest overall, percentage Health boosts are the best route to take with Geonosian Brood Alpha. Note that when Gear 13 and Relics come into play, Geonosian Brood Alpha’s Relic upgrade in SWGoH gives some nice stat increases to his survivability.

Additional Areas to Focus: Speed, Critical Chance, Potency, Tenacity and more survivability. Speed is a must for 98% of all SWGoH characters. Given the very good kit that Geonosian Brood Alpha has, additional Speed from secondary mod stats is wise. Critical Chance will help make Geonosian Brood Alpha’s basic more effective since he can dispel all buffs on an enemy on a critical hit. This ability is easily overlooked and recently had me adjusting mods to add more CC after re-reading his abilities. While this is a nice perk of GBA’s kit, I would not sacrifice much Health to add Critical Damage on the Triangle mod and instead gain the extra Health boost from that primary stat. Potency will help his Glaive Sweep special land Expose and remove TM from debuffed enemies, and debuffs grant TM to Geonosian Spy, so making him more potent is a good move. Tenacity is always a plus to keep negative status effects away, but note that GBA has +60% Tenacity per the Queen’s Will unique and 50% base Tenacity at Gear 13. Finally I would suggest more survivability be added to Geonosian Brood Alpha to complement his high Health stat. Additional Defense and Protection are just going to make it harder to kill GBA which will help you in any Geonosis: Separatist Might Territory Battle or anywhere else he is used, and keeping the Health and Protection stats high works nicely with his Health and Protection recovery from the Conscription special.

Speed Priority: 7/10 – While GBA is not a character that I would recommend to use Speed mods on, you still want some very strong Speed secondaries on your Health mods.

In-game Mod Recommendations: Speed & Tenacity. I have used Geonosians effectively since GBA was added in July 2019 and I remain firm on my recommendation to use Health mods over Speed or Tenacity mods on Geonosian Brood Alpha. To begin, endgame and high level players need Speed mods with high Speed secondaries in so many situations with counters for Territory Wars and the GAC that it’s hard to keep putting Speed mods on everyone and expect to have the secondary stats needed. Secondly, GBA is a character that really benefits from strong percentage-based Health enhancements given his high base Health stat and the mechanics of the Geonosian faction. As a result of all of this I highly disagree with the mod recommendations put forth by Capital Games for GBA.

Geonosian Brood Alpha has a kit that is in line with the direction of SWGoH – more Health driven with (a bit) less emphasis on Speed. The in-game recommendations call for Speed and Tenacity sets, while I feel that 6 Health mods (3 sets) are the better option. Thus, here is my recommended approach for GBA’s mods: