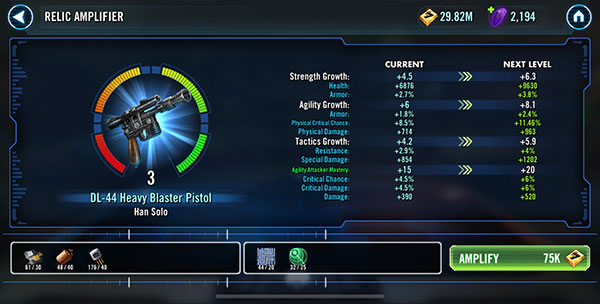 Continuing the Relic Review series, we take a look at Han Solo’s Relic upgrade and the impact it has on the game. As always these reviews compare a character at Gear 13, Relic Level 0 with Relic Level 7, and mods are not factored in.

Defensively, Han Solo gets one of the average Health boosts scoring an increase of 17,892, bringing him to 52,431. His defensive Armor stat gets a solid 13.47% increase, and his increase in Resistance of +8.39% is also middle of the pack compared to other Relic gains in the game. Han does not gain any Protection, Deflection or Dodge Chance, nor does gain any Physical or Critical Avoidance.

Of course the offensive side is where Han Solo shines in SWGoH and his Relic Amplifiers do not disappoint. Han gets a 2,884 increase in Physical Damage, tied with many others for the largest increase from any Relic in the game. His Special Damage increases can be ignores given he only deals Physical Damage. A 33.92% increase to his Physical Critical Chance brings Han Solo with a Level 7 Relic to 91.67% CC – one of the game’s highest CC stats. Expect this to impact his Deadeye special even more given he gains Turn Meter equal to his CC from this attack, however with his Shoots First unique granting him +20% CC to start, a maxed Relic will actually result in wasted stats putting him over 100% Critical Chance. This should be noted when modding Han Solo in SWGoH since CC mods and high CC secondaries will be wasted once you get him over 80% CC. While Special CC can be ignored, Critical Damage should not be as Han Solo gains an extra 13.5% CD when upgraded. Finally, there are no Accuracy, Health Steal, Resistance or Armor Penetration increases to his stats.

As we look at Han Solo’s place in today’s SWGoH, he remains a key Rebel character, usually under a Commander Luke Skywalker lead. Paired with Chewbacca, the two can be a deadly offensive combo, and when you factor in their roles as the pilots of the Millennium Falcon, both Han and Chewie are great choices to take to Gear 13 and beyond.