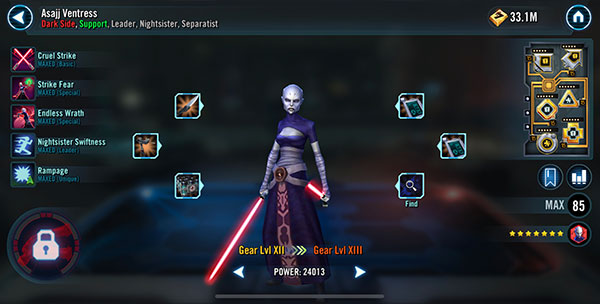 Continuing the Relic Review series, we take a look at the Relic for Asajj Ventress, her Lightsabers, and the impact it has on the game and her stats. As always these reviews compare a character at Gear 13, Relic Level 0 with Relic Level 7, and mods are not factored in. The stats mentioned are based on the data provided by the fine people at swgoh.gg.

Looking at the survivability and defensive stats, Asajj gets a very nice Health boost of 19,422 which is one of the higher Relic increases. Given all characters except for the Top 13 get between 16,812 and 19,746 this is not a huge advantage over the field, but it is a nice gain nonetheless. Since Nightsisters thrive on higher Health stats in multiple areas of the game, getting a larger boost here is a big win for Asajj. While she does not gain any Protection, her Armor increase is in the Top 25% of SWGoH character gains from Relics, and her 10.4% Resistance gain is 20th overall. Considering Asajj has been historically squishy in the game, these are very significant gains and very strong compared to the field. She does also gain a 15.75% increase in both Dodge and Deflection Chance to make her a bit harder to hit, but there are not Critical Avoidance stat gains to speak of.

Asajj Ventress is one of those rare characters in SWGoH who deal both Physical & Special Damage, making her Relic upgrades more efficient and more valuable than many. On the Physical Damage side, Ventress gets and average increase of 1,631 to bring her to 4,301 Physical Damage. Meanwhile, her Special Damage stat increases by 2,589, a decent boost, to nearly double her Special Damage output. The increases to her Physical and Special Critical Chance are strong, Physical CC with a +32.92% jump and Special CC with a 13.5% increase. This brings her maxed Physical CC to 81.11% before any enemies are defeated, and 96.11% after the first enemy dies, so her basic attack will be critting more than ever as her Rampage unique kicks in. Her Special CC, the one that impacts her AoE attack, maxes out now at 28.29%, so any added CC from mods on Asajj Ventress (sets or secondaries) will likely only be needed for the Endless Wrath special and not her basic attack. On top of these changes to her criticals, Ventress gains 13.5% Critical Damage from her Relic upgrade to Level 7 which will have her hitting even harder. This completes her stat gains as Asajj Ventress does not gain any Critical Avoidance, Health Steal or Armor/Resistance Penetration from her Relic.

Looking at Asajj Ventress and her Relic increases I can see why the developers did not give her bigger offensive increases as her stacking offense from her Rampage unique can turn into one of the hardest-hitting options in the game today before Relics. While Asajj and the Nightsisters hold a middle to upper-middle tier position in today’s Galaxy of Heroes, I know from experience how tough a very fast, Gear 13 Nightsister team can crush even the perfect counter in the Grand Arena Championships. I originally did not have any reason to review Asajj this early on our list, but the Reddit community asked and I must admit I am pleasantly surprised with her Relic stat gains. Add in her value in the Genonosis: Separatist Might TB and I feel like this data deserves a rating of Asajj’s Relic as a Medium to High Priority based on your roster, your need for strength in the Geonosis Territory Battles and how you value Nightsisters.

Be the first to comment on "SWGoH Relic Review: Asajj Ventress"