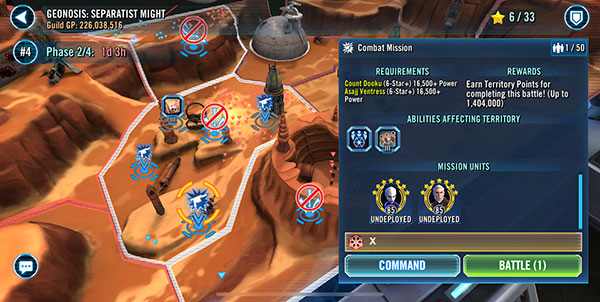 The Geonosis: Separatist Might Territory Battle in SWGoH features four Phases which last 36 hours each. Phase 2 features 3 territories as players battle with ships and ground troops. In the Middle Territory in Phase 2 there is a Combat Mission with just two characters used – Count Dooku (lead) and Asajj Ventress. To fight in the Phase 2 Combat Mission you must have both at 6-stars and 16,500+ power.

The following is a Walkthrough of my experiences in Phase 2 that may be updated over time.

08.14.19 – 4 battles are in this Combat Mission and 4 enemies are in the first battle. I always try to remove the Clone Trooper Medic (CTM) first in these battles to keep them from taking too long, but seeing the availability of adding the B2 Rocket Trooper immediately I decide to do so. While the B2 Rocket Troopers offense is poor at best, having a 3rd option to attack should help my survivability. I have a Zeta on Dooku now after fighting the last Geo TB without it, and having him take turns outside of his normal turn is very important to gain TM and Protection. Thus, when the B2 calls for an assist, Dooku will always be the guy. I take out the CTM, then the Jedi Vanguard and make quick work of the final two.

The second battle also has 4 enemies and Dooku is immediately called to assist and stuns the Clone Trooper. Keeping his taunt ability in check is key in these battles, so Ability Block, Shock and Stun are my goals. These enemies prove to be little challenge as I keep the ARC Trooper and Sergeant’s offense in check with debuffs while I am working toward increasing the stacks of Separatist Affiliation.

The third battle has a Jedi Vanguard (JV), Kit Fisto a Clone Sergeant and Sharpshooter. I go after the Jedi Vanguard first because of his crazy good kit, but before I can get more than a single attack in the enemies go nuts and have my B2 and Asajj in yellow health. Asajj heals and Dooku stuns the JV and I have regained the momentum. Dooku kills off the Clone Sergeant as I divert from my plan, but now I have weakened their team and I stick to the plan to kill off the remaining enemies.

The fourth battle is another 4-enemy affair as I come in with Dooku at full H&P and Asajj at full health with the B2 in yellow health. My team also has 4 stacks of Separatist Affiliation which deals 5% more damage per stack, so the 20% extra offense is a nice boost. I am facing a JV, Aayla Secura, Echo and a Clone Commander who is Elite. The JV is my target and a Dooku special Shocks him and Stuns both Clones leaving me with Rey’s voice in my head saying “that was lucky!” Asajj takes a few hits but Dooku takes them both into Stealth then Asajj heals and removes the buffs from the enemies, but my B2 is in the red. Dooku again shock/stuns the JV and Echo gets stunned as well. I lose the B2 which means I take some attacks and Asajj gets stunned, but the cooldown was timed well and I bring the B2 back and he calls a Dooku assist which kills off the JV. Now focusing on Aayla and Echo, I stun the Jedi and decide to take on Echo while she is immobilized. Dooku is the one to kill off Echo, adding a 6th stack of Separatist Affiliation and I have just Aayla and the Elite CC left, both in yellow health. A couple of hits later I finish them off for 1,404,000 Territory Points.

08.28.19 – I was able to beat this the last time I fought it (above) and have since added a piece of gear to both characters and upped their Speed. While Asajj did take a hit on Offensive output, +35 Speed feels like a better move IMO.

Keeping Dooku hitting outside of his turn is the key to these battles IMO, and if Dooku can make the kill that is even better to stack that Separatist Affiliation. By the time I complete the first two battles I have 3 stacks of Separatist Affiliation and my non-droids (Dooku and Ventress) are near full health and protection. Every time the B2 Rocket Trooper uses his middle attack I always call Dooku to assist as I am getting a lot of stuns from this and he regains protection thanks to his Zeta ability. The fourth and final battle sees me with 5 stacks and nearly full strength as I face the two Jedi and two Clones. I stun the JV with Dooku’s special and then work on killings him off. Asajj gets down to about 50% health then heals which leads to the killing of the JV. Dookue takes a barrage of attacks and is below 50% health, but counters to regain protection, then go stealth. Echo attacks with his EMP and Dooku counters again and kills him for another stack, then Dooku shock/stuns the Clone Commander who I choose to go after before Aayla because she counters a lot. Asajj kills off the CC and a yellow health Aayla is all that is left to beat and after Dooku puts himself and Asajj in stealth, the Nightsister finishes Aayla Secura off for the win.

I have upgraded Count Dooku to Gear 13 and sliced one of his mods since the last time to ensure success on this and other Separatists Might battles. Here are the changes to my roster since the first time I fought this Combat Mission:

09.11.19 – I was able to beat this the last two times I fought it (above) and have continued to upgrade since then, so I expect success each battle moving forward. I end the first battle with 3 stacks of Separatist Affiliation which I hope all reading this understand by now. If not click the link for a detailed look at how that works. The second battle sees me end with ease and 5 stacks as I look to make this as easy in the 4th battle as possible. The third battle goes so quickly that I get distracted and end up finishing the fourth battle without realizing this was the end. An easy 1,404,000 points with this team.