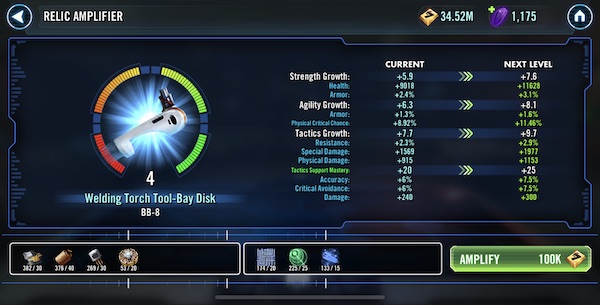 Continuing the Relic Review series, we take a look at BB-8’s Relic and the impact it has on the game. As always these reviews compare a character at Gear 13, Relic Level 0 with Relic Level 7, and mods are not factored in.

Defensively, BB-8 gains 16,812 Health, which brings him to just over 50k Health in total. However, this gain is tied for the lowest Health increase from Relics for any character in SWGoH. Unfortunately, his defensive Armor stat gets an increase of just 8.38%, along with a 4.93% gain in Resistance, both of which are in the bottom 10% of all Relic stat gains in the game. However, from his Mastery gains, BB-8 receives a boost of 13.5% to both his Physical & Special Critical Avoidance which helps at least make up for the disappointment above.

On the offensive side, BB-8 gains an average 2,171 Physical Damage from upgrading him to Relic level 7. While he does  see a Special Damage gain of 3,336, we can ignore this stat increase since he only deals Physical Damage, thus making this a wasted gain. There is a 16.58% increase in Physical Critical Chance that is worth noting, but given how little you want BB-8 attacking this is not a stat gain to get excited about. Finally, both his Physical & Special Accuracy get a boost of 13.5%, but again, since he only deals in Physical Damage, only that increase matters.

As we look at BB-8’s place in today’s SWGoH, he is a solid, useful character in a variety of lineups, most notably alongside Rey (Jedi Training) and Resistance allies. While he is useful and fun to use, needing to upgrade his Relic to level 7 for the Galactic Legend event feels like a waste of resources to me and further shows the disconnect of Capital Games and their player base. Investing valuable resources in high-value characters and in large stat gains is something that few PTPers will ever complain about. But it is the requirement of needing Rose Tico and the Veteran Smugglers at high Relic levels, and poor stat gain characters like BB-8, these practices continue to drive players away. In the end, BB-8’s Relic should be categorized on the lower end of the Medium Priority category simply because he is a great character to have and fun to use in-game. Of course if you are chasing Galactic Legend Rey this moves him to the bottom of the High Priority tier, but the stat gains are nothing more than a disappointment comparatively speaking.

Be the first to comment on "SWGoH Relic Review: BB-8"