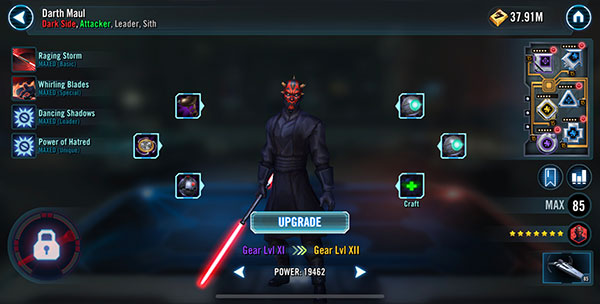 Continuing the Relic Review series, we take a look at the Relic for Darth Maul, his Double-Bladed Lightsaber, and the impact it has on the game and his stats. As always these reviews compare a character at Gear 13, Relic Level 0 with Relic Level 7, and mod enhancements are not factored in. The stats mentioned are based off of the data provided by the fine people at swgoh.gg.

Looking at the survivability and defensive stats, Darth Maul gets an average Health boost of 17,910 which is middle of the pack given all characters except for the Top 13 get between 16,812 and 19,746. Since Maul has other Health-based gain built into his kit, such as the +20% Max Health and Max Health gains from his Power of Hatred unique, this number will prove to be even more valuable. Two stats I hoped to see improved for Maul were these next two, Armor and Resistance, given Darth Maul has always been quite squishy. Unfortunately his Armor gain (10.49%) is below average compared to the field and his Resistance gain (8.47%) is just average. Since there are no Dodge or Deflection gains to speak of, nor does Maul see increases in his Critical Avoidance, this rounds out his defensive and survivability stat gains from his Relic.

Offensively speaking, given the fact that the numbers above are average at best, I expect some strong gains here. However, because Darth Maul only deals Physical Damage, the gains to Special Damage and Special Critical Chance will be unfortunately wasted. That having been side, his Physical Damage gain of +2,883 is one point away from being tied for the highest Physical Damage gain for any SWGoH character from a maxed out Relic, and represents a 74% increase for his offensive output. A 33.88% gain in Physical Critical Chance is one of the best Relic gains as well, bringing his CC to 86.62% at Relic Level 7, and Maul is one of the select few to gain 13.5% Critical Damage.

Once the lead for one of the iterations of the Sith META, like his brother Savage Opress, Darth Maul today just does not that major role in SWGoH. As I mentioned in the other article, that can always change given we still expect additional Clone Wars content, but I just do not see Savage getting back to the top of the Arena mountain like he once was. I personally sit Maul out in the Grand Arena and never use him in Territory Wars, often using the Sith Triumvirate alone before adding Maul’s squishiness. While the upgrade to Relic Level 7 for Darth Maul does add some solid Health and strengthen his offensive output, I do not see this as enough to really help him make any significant gains against the field in SWGoH. While having a ship helps and may eventually be the reason he becomes more relevant in the coming months, for now I am giving Darth Maul’s Relic a Low to Medium Priority grade.