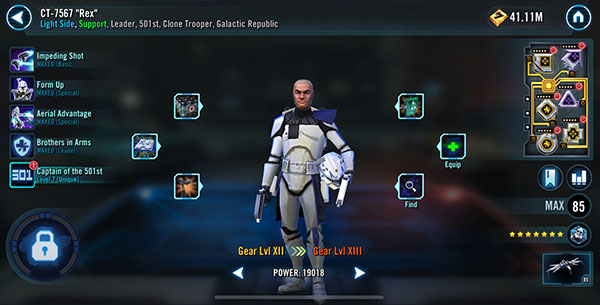 Continuing the Relic Review series, this article will focus on CT-7567 (Rex) and his Relic, a pair of Twin DC-17 Blasters. As always, these reviews compare a character at Relic level 0 to Relic level 7 and mod enhancements are not factored in.

To start, Rex gains a middle of the road Health increase of 16,830, bringing his total to 49,349. He also gains an additional 12.56% Armor and 8.22% Resistance, both respectable numbers compared to the field. For his final defensive gain, Rex receives an additional 13.5% Physical Critical Avoidance and Special Critical Avoidance. However, this final stat can actually hinder his leader ability because characters under a Rex lead gain Turn Meter when enemy characters score critical hits.

Looking at his offensive numbers, Rex sees an average 2,170 Physical Damage increase, bringing his total to 5,029. The 16.58% Physical Critical Chance gain takes his final number to a solid 66.92%. When used with other clones, Rex’s second special can eliminate nearly any character and the 13.5% Physical Accuracy boost Rex receives from his Relic will ensure that this move won’t be dodged.

Rex is an extremely useful character that can fit in several different teams and lineups across multiple game modes. Additionally he is about to be part of the (likely) best team in the game once General Skywalker is released. However, I don’t feel like the stat increases from his Relic are worth the investment compared to many other characters which is why I have him in the Medium Priority tier. I would like to point out that Rex is worth taking to Gear 13 for the additional speed alone.