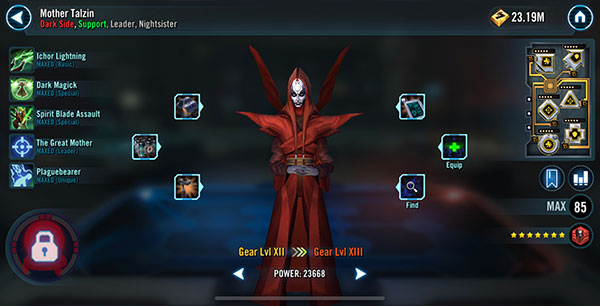 Continuing the Relic Review series, this article will take a look at Mother Talzin and her Relic, the Crystal Ball. As always, these reviews compare a character at Relic level 0 to Relic level 7 and mod enhancements are not factored in.

To start off, Mother Talzin receives a slightly below average Health increase of 16,830, bringing her total to 60,690. Her 13.35% Armor increase and 8.41% Resistance increase are both notable and will give Talzin a much needed survivability boost. This is paired nicely with a 13.5% gain in both Physical Critical Avoidance and Special Critical Avoidance.

Looking at her offensive numbers, Talzin first sees a 3,336 Special Damage increase, bringing her total up to an impressive 8,911. Her only other offensive increase is a 13.5% Special Accuracy boost, which is quite disappointing, as I hoped to see Mother Talzin’s Special Critical Chance get a needed increase. Because Mother Talzin only deals Special Damage, the increases to her Physical Damage, Physical Critical Chance and Physical Accuracy can be ignored.

While Nightsisters aren’t a top META team, they are extremely useful in several game modes and Talzin is an essential member to the team. However, her stat increases from her relic are overall quite average. Because of these factors, I put another Talzin’s relic in the Medium Priority tier.