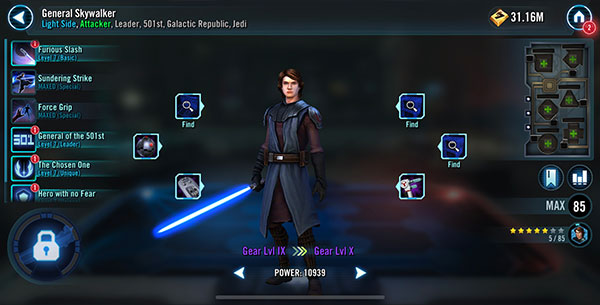 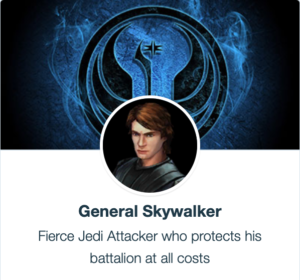 Today’s character to review mods for will be the most powerful pay-to-play character in Galaxy of Heroes to date, General Anakin Skywalker. Unlocking General Skywalker was quite the task, and for the lucky ones who did add him to their roster in October 2019 or for those that add him the next time around, this mods guide should be helpful as you look to make this version of Anakin as effective and dominant as possible. Of course as we review the best mods for General Skywalker we also need to keep in mind how his Relic upgrade impacts his abilities as well and how this will all translate into Territory Battles, Raids, Territory Wars and the Grand Arena Championships. So without further ado, here is a look at the best mods for General Anakin Skywalker.

Main Focus: Speed. For now, while players are still getting used to General Skywalker in gameplay, I will stick with the easy answer of Speed. 90%+ of all characters in this game need Speed to be effective, and there’s no reason to think that Speed will not enhance his already strong offensive kit. His base Speed is 157 which is not one of the top Speed stats in the game, but it does put him in the top 25% of all SWGoH characters.

Additional Areas to Focus: Potency, Offense, Critical Chance, Critical Damage and survivability in the forms of Defense and Protection. You can make a case for all of the above stats to be enhanced, and starting with Potency, it sets up additional attacks. His Force Grip special is more likely to land the Daze debuff if you increase his Potency, and given Dazed enemies receive double damage from the Sundering Strike special attack, the potential for bigger hits actually comes from added Potency. Of course, if you want big hits, build up the offensive numbers with Offense, Critical Chance and Critical Damage enhancements. Note that a Gear 13 General Skywalker has just under 44% CC before mods (Level 0 Relic) and a Zeta on the unique Hero with no Fear gives GS +50% CC, so loading up on Crit Chance mods and secondaries will not be as necessary as high Offense secondaries and a triangle with a Critical Damage focus. Note that we rank Hero with no Fear as a must-have Zeta for General Skywalker on his Zeta priority list and when ranking the Zetas for the 501st. However, since many of us will have a 5-star General Skywalker for some time, temporary CC boosts are not a bad idea. A Gear 11 (+5) GS has just 33.63% CC before mods, and given critical hits from General Skywalker increase the cooldowns on the enemy he is attacking, this should prove to be an important early strategic advantage. Finally, added Defense and Protection are a good fit for General Skywalker to enhance his Hero with no Fear unique as he gains +25% Defense, +15% Max Protection and +25% Tenacity for each other 501st ally until they are defeated. Of course if you use him under a Padme Amidala lead or in another lineup you will not get these stat boosts, so keep that in mind.

In-game Mod Recommendations: Speed & Health. While Speed is pretty much important for nearly every character in SWGoH, my gut is telling me more Critical Chance is necessary until he gets closer to Gear 13. Reviewing his Relic upgrade, CC will not be a problem as you get it leveled up since he maxes out at just under 62% CC before the +50% from the Hero with no Fear unique. To start I am looking to use a Speed and CC set on General Skywalker until I get him to Gear 13, then I will look to replace the CC set with a set of two Health mods.

The “ideal mod setup” can be interpreted a few different ways. If you target Speed, Offense, Crit Damage, Potency, Defense and Protection through the mods, and CC early one, you should be able to maximize General Skywalker’s kit. Here are my recommendations for the best mods for General Anakin Skywalker:

Be the first to comment on "SWGoH: Best Mods for General Skywalker"