Spinecone is a resource in Avatar: Pandora Rising that is important to the Na’vi. The gathering of Spinecone, whether from a Rally or an individual commander on their own, provides the Spincone Needles needed to make the Spine Shield which is important in early gameplay. As your game progresses, Spinecone Needles are one of two ingredients in War Paint which is essential in leveling up your troops for higher levels of competition.

Spinecone can be acquired by any commander in Avatar: Pandora Rising who has the Gatherer tag, however two commanders specialize in Spinecone – Alira and Ukawla. So who is the best Na’vi Commander to gather Spinecone? Let’s look at their stats.

Ukawla – Ukawla is an Epic commander who gathers Spinecone with +12% at Level 1 of her Thicketweaver ability and can advance to as much as 39% at solo sites. Her Spinecone Gather Skill ranges from +40 at Level 1 to +150, but both of those stat ranges are even stronger at Spinecone Rally Sites. On defense Ukawla adds to all Towers and while she also gives the Titanothere a solid level boost (+4 to +32). An update in December 2019 also added a boost to All Troops (+4 to +28) for Ukawla which made her defense much more viable.

So we ask again, who is the best Na’vi Commander to gather Spinecone? 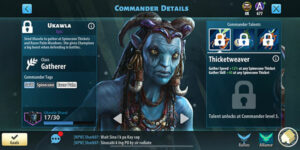 FoxNext made updates to the game in November and December 2019 that made this comparison was a bit back and forth. However, those update traded the Champion boost that Ukawla formerly handed out to instead boost the Titanothere and it removed the Swift tag. Then, after seeing how weak Ukawla was on defense, they added an All Troops defensive bonus. With Alira boosting all Troops a small amount she remains a solid gatherer of Spinecone and a safe character to upgrade extensively, but for late game players Ukawla scales better. As one of the few Epic characters available, I expect FoxNext will continue to ensure that Ukawla remains one of the best Na’vi Commanders in Avatar: Pandora Rising, so I give her the nod based on the better Spinecone gathering stats and improved defense at those sites.

Be the first to comment on "Best Avatar PR Commanders: Spinecone Gathering"