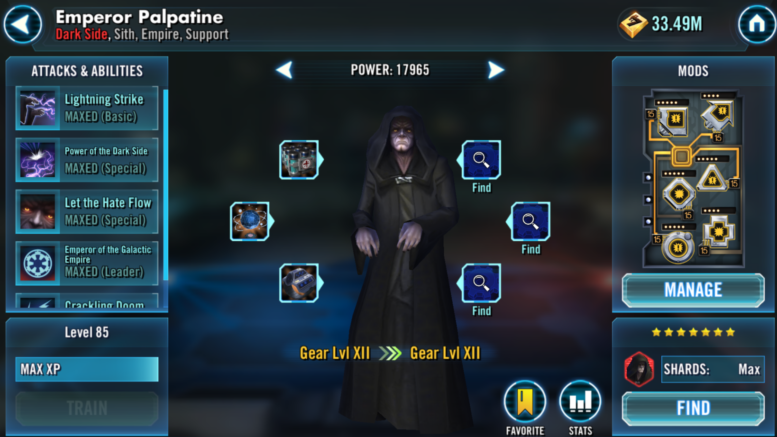 In another edition of the Relic Review series, this article will focus on Emperor Palpatine and his relic, the Emperor’s Cane. As always, these reviews compare a character at Relic level 0 to Relic level 7 and mods are not factored in.

Emperor Palpatine gains a slightly below average Health increase of 16,830, which as we read in Palpatine’s mods guide, his Health and Protection stats are quite important. The 14.58% Armor and 7.56% Resistance increases will certainly improve his survivability. In addition, Palpatine receives an additional 13.5% Physical Critical Avoidance and Special Critical Avoidance.

Emperor Palpatine is a fairly useful character whose leader ability greatly increases his versatility throughout the game. However, the stat increases from his relic are fairly disappointing except for the Special Damage increase. I place Palpatine around the middle of the Medium Priority tier because of these factors as we hold out hope for another rework to his kit surrounding The Rise of Skywalker‘s debut.