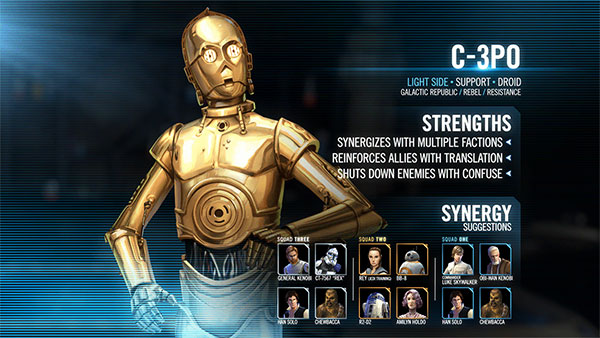 Continuing the Relic Review series, this article will take a look at C-3PO and his relic, a Tranlang III Communication Module. As always these reviews compare a character at relic level 0 to relic level 7 and mods are not factored in.

C-3PO is an unusual character since he doesn’t deal damage with any of his abilities. Because of this, the increases to his Physical Damage, Special Damage, Physical Critical Chance, Physical Accuracy and Special Accuracy will be ignored.

Starting off, C-3PO gains a below average Health increase of 16,830. His Armor and Resistance increases are both incredibly low as well, at just 6.4% and 5.68% respectively. Finally, he gains a 13.5% boost to both Physical Critical Avoidance and Special Critical Avoidance.

C-3PO is a very good character with high usability and versatility throughout the game. However, there is nothing impressive about his Relic gains and it is one of the worst I’ve reviewed. I place it in the middle of the Low Priority tier.