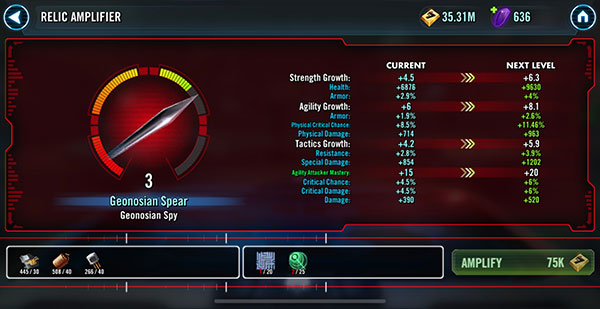 Continuing the Relic Review series, this article will take a look at Geonosian Spy and his Relic, the Geonosian Spear. As always, these reviews compare a character at Relic level 0 to Relic level 7 and mods are not factored in.

Starting off, Geonosian Spy gains a slightly below average Health increase of 17,910. The 12.67% Armor increase and 7.54% Resistance boost are both very useful as keeping him alive to land big hits is crucial for the Geonosian team.

Geonosian Spy is a valuable member of a Geonosian team that has significant value across the game. In addition the overall stat increases from his Relic suit Geo Spy very well and benefit him greatly. Because of these factors I place him in the lower end of the High Priority tier.