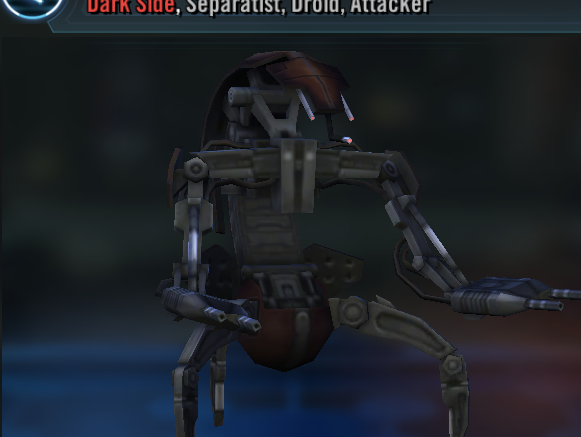 Continuing the Relic Review series, this article will take a look at Droideka and his Relic, the Deflector Shield. As always these reviews compare a character at Relic level 0 to Relic level 7 and mods are not factored in.

To start, Droideka gains a 19,728 Health increase. Comparatively speaking, this is a very solid number and a higher gain than most characters receive from their Relic upgrades. In addition, his 13.02% Armor and 10.53% Resistance increases are both quite useful.

On the offensive side of things, Droideka gains 2,704 Physical Damage, bringing his total to 6,835. This pairs well with his 18% Physical Critical Chance increase and a 13.5% boost to Physical Accuracy. Finally, he gains +90 to both Armor Penetration and Resistance Penetration – both rare increases typically saved for top-notch attackers in SWGoH like Jedi Knight Anakin and Sith Marauder. Because Droideka only deals Physical Damage, the increases to his Special Damage and Special Accuracy can be ignored.

While Droideka’s main usage is either under a Grievous lead or a Nute lead, he fits very well with either of them whether it’s a combat mission in Geonosis Territory Battles or a match in Territory Wars or Grand Arena Championships. In addition he is one of the five characters needed for arguably the most difficult battle in the game, Tier 4 of the General Skywalker event. When you consider these factors with the fact that Droideka’s Relic adds very useful stat increases for an attacker, it becomes a fairly good option. I will place Droideka on the upper end of the Medium Priority tier.

Be the first to comment on "SWGoH Relic Review: Droideka"