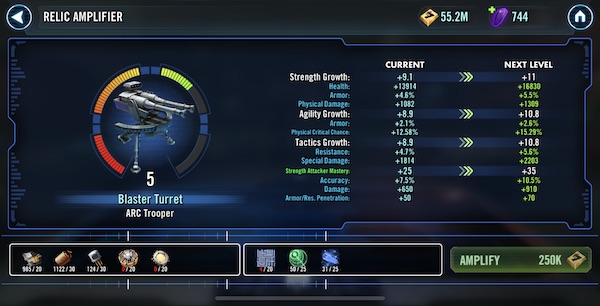 For the latest addition to the Relic Review series, I will take a look at ARC Trooper and his relic, the Blaster Turret. As always these reviews compare a character at Relic level 0 to Relic level 7 and mods are not factored in.

To start off ARC Trooper gains an impressive Health increase of 19,746, taking his total to 65,627. The 12.17% Armor and 7.81% Resistance increases are respectable and pair very well with his high health.

Looking at the offensive numbers, ARC Trooper gains an additional 2,706 Physical Damage. This stat has increased value because the damage of the Blaster Turret that ARC Trooper summons into the ally slot scales based on his offensive stats. The increases of 90 to both Armor Penetration and Reisistance Penetrarion are very useful for an attacker, and he also sees a 13.5% Physical Accuracy bump as well as an 18% boost to Physical Critical Chance. Because ARC Trooper only deals Physical Damage, the increases to his Special Damage and Special Accuracy should be ignored.

Clones, whether they’re under a Shaak Ti or General Skywalker lead, have high value in essentially every SWGoH game mode and ARC Trooper is a core member of the team. They are one of the top teams to complete combat waves in the new Light Side map of Geonosis Territory Battle, they are required to earn Ki Adi Mundi shards, and they are part of the newest META. When you consider them also having high usability in GAC and Territory Wars, it’s clear that ARC Trooper should be highly valued. In addition, the stat increases from his Relic are quite good. Because of these factors I am putting ARC Trooper in the middle to upper area of the High Priority tier. He is an excellent candidate for a level 7 Relic.