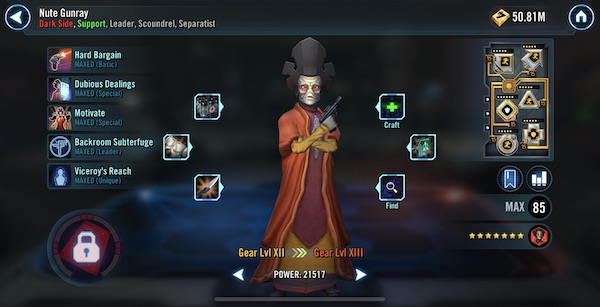 Continuing the Relic Review series, this article will take a look at Nute Gunray and his Relic, the Incriminating Datapad. As always these reviews compare a character at Relic level 0 to Relic level 7 and mods are not factored in.

First off Nute Gunray gains a slightly below average Health increase of 17,892. However since he can revive once, this increase is effectively doubled to 35,784 making it much more valuable. This pairs well with his 13.92% Armor and 9.29% Resistance increases, both solid numbers. In addition Nute Gunray gains a very valuable 15.75% boost to both Dodge Chance and Deflection Chance.

Whether he’s leading his own team or slotting in as the fifth under a General Grievous lead, Nute Gunray has a lot of value within the Separatist faction. While the offensive side of his Relic is somewhat disappointing, the defensive side more than makes up for it. After looking at all factors, I put Nute Gunray in the upper end of the Medium Priority tier.

Be the first to comment on "SWGoH Relic Review: Nute Gunray"