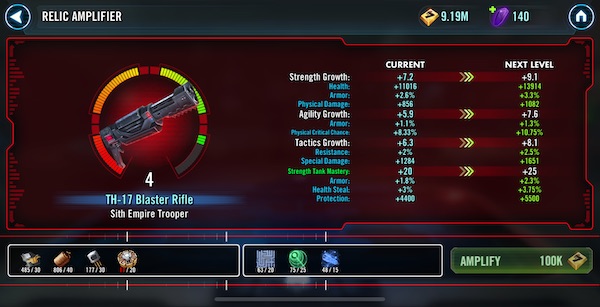 In another addition to the Relic Review series, this article will take a look at Sith Empire Trooper and his Relic, the TH-17 Blaster Rifle. As always these reviews compare a character at Relic level 0 to Relic level 7 and mods are not factored in.

Trooper gains a very useful Health increase of 19,728. While the 14.33% Armor increase is impressive, the 4.66% Resistance boost is disappointing. He also gains an extra 9,900 Protection.

On the offensive side, Trooper gains a below average Physical Damage increase of 1,535. He also gains a 15.54% Physical Critical Chance boost and a 6.75% Health Steal bump. Because Trooper only deals Physical Damage, the increase to his Special Damage can be ignored.

Being a Sith tank with a pre-taunt, Trooper is able to slot in under several different leaders like Palpatine, Darth Traya, and Darth Revan and fill the role of the tank. He’s a fairly useful character overall and the stat increases from his Relic are worthwhile. I am placing him in the upper end of the Medium Priority tier.