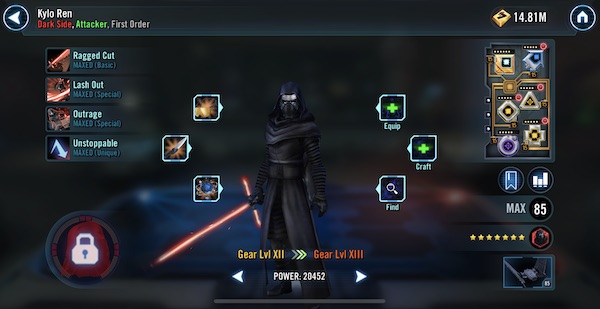 Continuing the Relic Review series, this article will look at Kylo Ren and his Relic, Darth Vader’s Mask. As always these reviews compare a character at Relic level 0 to Relic level 7 and mods are not factored in.

Starting off, the game’s original Kylo Ren gains an excellent Health increase of 19,728. This pairs well with his 12.54% Armor and 7.28% Resistance increases.

Kylo Ren is a valued member of a First Order team with his ability to apply debuffs and grant his allies large amounts of bonus turn meter. He is also needed to unlock Galactic Legend Kylo Ren after the mid-February announcement. With that in mind, he is in the middle of the High Priority tier. If that is not important to you, Kylo is in the middle area of the Medium Priority tier.