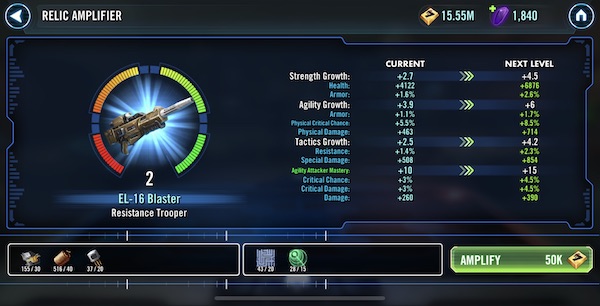 Continuing the Relic Review series, this article will take a look at Resistance Trooper and his Relic, the EL-16 Blaster. As always these reviews compare a character at Relic level 0 to Relic level 7 and mods are not factored in.

Starting off, the Resistance Trooper gains an average Health increase of 17,910. While the 6.6% Resistance increase is a little low, his 11.51% Armor increase is excellent to help his survivability.

Resistance Trooper gains a large Physical Damage increase of 2,884. He also gains a 13.5% Critical Damage bump and a massive 33.92% Physical Critical Chance increase, bringing his maxed out total to 89.33% CC. Given the importance of critical hits under a Rey (Jedi Training) lead this is significant, but it seems that the new Galactic Legend Rey will have a similar synergy with crits. Because the Resistance Trooper only deals Physical Damage, the increases to his Special Damage and Special Critical Chance can be ignored.

Resistance Trooper is an excellent addition to any Resistance team and his Relic greatly enhances his role as a high damage dealing attacker. I’m addition, he must be Relic level 5 in order to compete to unlock Galactic Legend Rey. Because of these factors, I am placing Resistance Trooper in the middle of the High Priority tier. If you do not care about Galactic Legend Rey, he is in the upper end of the Medium Priority tier.

Be the first to comment on "SWGoH Relic Review: Resistance Trooper"