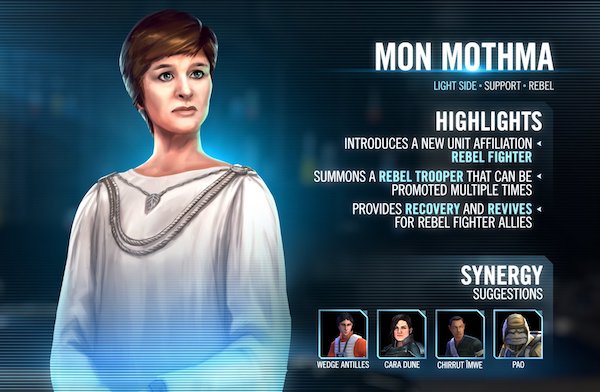 Welcome to the best mods for Mon Mothma, the latest article in our series about the popular game Star Wars Galaxy of Heroes where we take a look at the ideal mod setups for SWGoH characters. While I do not claim to have all of the answers in this game, I do my research and have used every character I write about extensively. These are mod recommendations based on the character’s kit and actual gameplay to help you in your quest to dominate the Galaxy of Heroes holotables. Since Mon Mothma is being released on the day this is written, I will update this once gameplay and testing can be factored in. 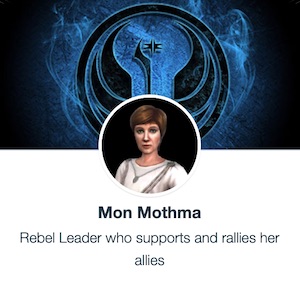 Today’s character continues a recent trend of very creatively-designed characters by EA Capital Games. Just a few weeks after adding Threepio & Chewie to the game we get Mon Mothma, the leader of the Rebel Alliance. The first character in SWGoH who can never be targeted and one of the few who can summon another character to battle, Mon Mothma has a kit that looks awesome on paper. Let’s take a look at the best mods to maximize the abilities of Mon Mothma in Galaxy of Heroes.

Main Focus: Speed. When mods were added to SWGoH, Capital Games did not realize the corner they had painted themselves into.  While there is nothing that can be done about that now, it places extreme pressure on players to have hundreds of mods with high Speed secondaries.

For Mon Mothma, her kit is incredibly creative and like many top-tier Support characters, you want her using her abilities as much as possible. The high Speed will allow for Mon Mothma to summon/promote, heal and revive more often which could be the difference in winning or losing your battle. As a result a Speed set is recommended and high Speed secondaries will be necessary. Note that a set of 4 Speed mods will boost the base Speed of 111 and will not be calculated with the extra +50 Speed that comes from Mon Mothma’s This is Our Rebellion unique.

Additional Areas to Focus: Tenacity, Potency, Offense and survivability in the forms of Defense, Health and Protection for Mon Mothma, and Potency, Offense, Critical Chance and Critical Damage for the summoned Rebel Trooper. For Mon Mothma herself, you want her alive and taking turns as much as possible, but those turns are far less impactful if she has Ability Block or is otherwise impaired. This is where Tenacity comes in as a heavy focus to keep the red icons away from her head. All forms of survivability are wise given her Alliance Chancellor unique grants her and all Rebel Fighters 8% of their combined Max Health, Max Protection, Offense, Defense, Potency and Tenacity, so beefing up all of her survivability stats, as well as her Offense and Potency, will add to this pool and help her teams be more survivable.

Note that summoned Rebel Trooper’s stats “scale with the summoner’s stats.” Given the Rebel Trooper can inflict Daze on his basic when promoted to Rebel Officer or Rebel Commander, added Potency will only help this debuff “stick.” The Rebel Trooper also has +15% CD from his unique, so added CC will help him crit more often and any addition Offense is nice to have as well.

In-game Mod Recommendations: Speed & Tenacity. My immediate thought was that Speed will play a large role with Mon Mothma’s creative kit, and I can see where Tenacity will also have very high value. After more research I feel like this is the correct route to go, but note that the extra +50 Speed that comes from Mon Mothma’s This is Our Rebellion unique is not part of the calculation of +15% Speed from a set of four maxed Speed mods.

Trying to find the perfect mods for any character in SWGoH is a challenge, but having a deep inventory of good and great mods is recommended. If you target Speed and survivability stats from the mods you will have an effective Mon Mothma, but blending in the extra Potency, Critical Chance and Offense in the secondary stats will really boost her overall value when combined with her Rebel Fighters. Here are my recommendations for the best mods for the Mon Mothma in SWGoH:

Be the first to comment on "SWGoH: Best Mods for Mon Mothma"