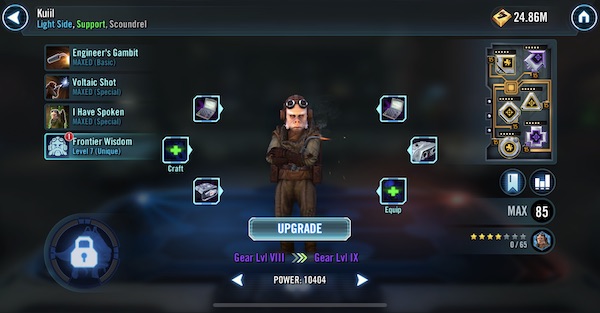 Welcome to the best mods for Kuiil, the latest article in our series about the popular game Star Wars Galaxy of Heroes where we take a look at the top mods for SWGoH characters. While I do not claim to have all of the answers in this game, I do my research and have used every character I write about extensively. These are mod recommendations based on the character’s kit and actual gameplay to help you in your quest to dominate the Galaxy of Heroes holotables. 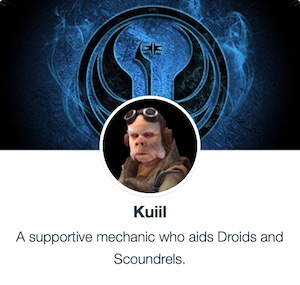 Today’s character to review mods for will be the newest addition in SWGoH, Kuiil. One of the stars of season one of The Mandalorian, Kuiil is the likable Ugnaught who was an indentured servant of the Empire and worked a lifetime to be free of his servitude. In SWGoH he is a Light Side Support character who, interestingly enough, is also a Scoundrel.

Main Focus: Speed. While the developers have attempted to shy away from the need for huge Speed on characters in SWGoH at times, it remains the necessary evil of Galaxy of Heroes at the time of this writing, especially for nearly every major support and attacker in the game. For Kuiil, his Max Health and Max Protection are incredibly important to his overall kit, but I think this stats can be gained from the primary stats on the triangle and plus mods, so I recommend a set of four Speed mods with secondary stats matching those recommended in the next paragraph.

Additional Areas to Focus: Health, Protection, Potency and Tenacity. Going heavy on survivability in the forms of Health and Protection is key in the secondary mod stats to maximize Kuiil’s I Have Spoken special which recovers Health and Protection based on Kuiil’s stats. In addition, when you add the Zeta on his Frontier Wisdom unique, it adds the following text: “Droid and Scoundrel allies gain 40% of Kuiil’s Max Health, Offense, and Potency, and they gain 40% of Kuiil’s Max Protection until the first time he is defeated.” In addition to Health & Protection, adding a strong boost to Kuiil’s Potency is highly recommended as both his basic and first special are debuff-inflicting attacks. Finally, added Tenacity helps keep the debuffs away and added Offense will help the Zeta boost Droids & Scoundrels on Kuiil’s team.

In-game Mod Recommendations: Speed & Potency. I typically find that the newer characters in the game have better mod recommendations than the pre-Mods 2.0 characters, simply because the new characters are released one at a time and get more attention. Kuiil is no different as the in-game recommendations of Speed and Potency are right in line with my own recommendations. While I could see the argument for a Health set in place of Potency, his base Potency stat only goes to 58% at Gear 13 and Kuiil’s Relic upgrade does not increase this, so using a Potency set and saving the plus mod for added Health or Protection seems like a better move..

The “ideal mod setup” can be interpreted a few different ways as our analysis of each character is based on their kit and can be a bit subjective as well. If you target Speed, Potency, Health and Protection through the mods you should be able to maximize Kuiil’s kit nicely, and he is a nice fit for high speed triangle and plus mods with a protection primary. Here are my recommendations for the best mods for Kuiil: