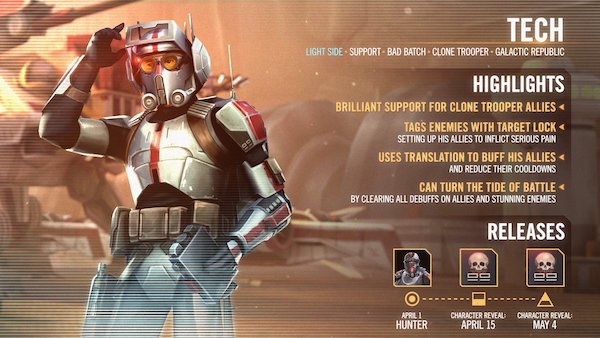 Welcome to the best mods for Tech, the latest article in our series about Star Wars Galaxy of Heroes where we take a look at the best mods for individual SWGoH characters. While I do not claim to have all of the answers in this game, I do my research and have used every character I write about extensively. These are mod recommendations based on the character’s kit and actual gameplay to help you in your quest to dominate the Galaxy of Heroes holotables. 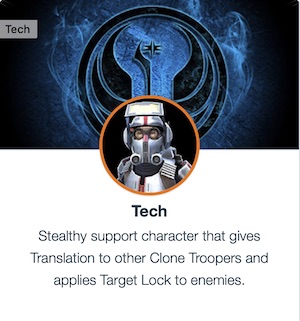 A member of “The Bad Batch,” a clone commando special forces squad that was active during the Clone Wars, Tech was introduced in SWGoH in April 2021 as the second member of the Bad Batch faction, joining Hunter. A Light Side Support character who is a Clone Trooper, Tech also belongs to the Galactic Republic and Bad Batch factions. Let’s take a look at Tech and the best mods to fit his kit in SWGoH.

Main Focus: Speed is the statistic that EA Capital Games made the most important stat in the game when they added mods back in the summer of 2016, and Tech has a much higher base Speed of 160 when compared to Hunter’s 138. This indicates that Speed will be a significantly more important piece of Tech’s kit, and it appears that the devs agree given they recommend a Speed set. In addition, Tech gains Speed from his unique, Clone Interpreter, which further hammers this point home.

Additional Areas to Focus: Potency and survivability in the forms of Health, Tenacity and Defense. First off, all Bad Batch allies gain +50% Potency from Hunter’s leadership, and then Tech gains +25% Potency for each stack of Translation on himself, so this character should be loaded already. That having been said, the Target Lock debuff appears to be very important to the Bad Batch faction, and the ability to land Stun as well can really help Tech disrupt your enemies. Tenacity will help ward off those detrimental effects and Health is a key stat for Tech. His Delicate Operation special heals for up to 80% of his own Max Health, and he gains +30% Max Health with the first Translation buff each time, so boosting this stat is wise. Defense should also be a focus since it appears that the Defense Up buff will play a strong role on this team, so added Defense just amplifies this.

Speed Priority: 8/10 – For now I am going with an 8 for the Speed Priority for Tech until we know more about the Bad Batch characters.

In-game Mod Recommendations: Speed and Potency. Until we have the other Clone Force 99 character kits the best bet is to follow the in-game mod recommendations and look to find strong Speed secondary stats. That having been said I have some early thoughts on mod sets below.

Tech is the second member of the Bad Batch faction and will surely fit into that team quite nicely given it is perfect for a game like Galaxy of Heroes. While CG recommends a Speed and a Potency set, I could see a Health set used over Potency with a Potency-focused plus mod as an option too. Either way, here is my preferred mod setup for Hunter: