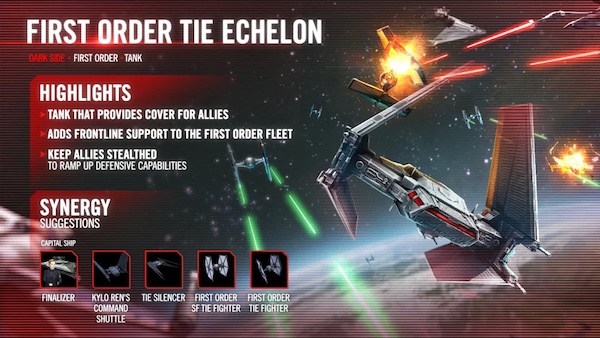 The latest update to Star Wars Galaxy of Heroes is adding two new much-needed ships, tanks for both the Resistance and the First Order. While both were released yesterday, we posted that the MG-100 StarFortress SF-17 will bolster the Resistance and their rivals finally get a faction-based tank as well. The First Order TIE Echelon is described in-game as a “First Order Tank that covers its allies by providing them with Stealth.” The First Order TIE Echelon will be piloted by the First Order Officer and can be opened in an upcoming Galactic Chase event to earn shards. For the complete FOTE kit click here or check out the developer’s insights on the EA Capital Games SWGoH forums.