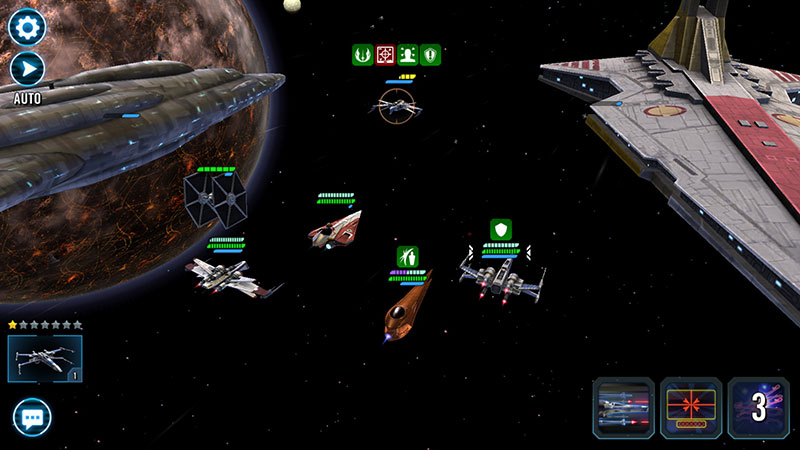 Whether we like it or not, ships are one-half of Star Wars Galaxy of Heroes. Players have a love/hate relationship with ships, from the crystal rewards from fleet arena, to their ability to pull victory from the face of defeat in Territory Wars and Grand Arena. In the end, nobody can deny their significance to players’ rosters. There have been a number of noteworthy changes to this critical component of the game lately, and it’s about time we broke them down to their core components. Batten down the hatches, holotable heroes! 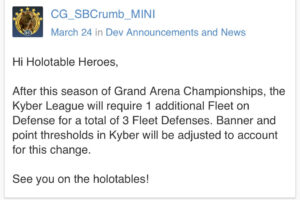 The kyber requirement update announcement came as a surprise to some – and a painful one at that. In an era where the Executor reigns supreme, and most big-name content creators are tutoring the community on how to reliably two-shot such a dominant fleet, this update sounds a death knell for their Grand Arena rewards. Whereas before, four fleets were sufficient enough to attack and defend with, now high-end players will have to utilize six. Considering there are only nine capital ships – two of which are for the same general fleet makeup/faction (which realistically leaves seven fleets available) – it’s just enough to drop the necessary three fleets on defense while saving three for offense. As the happy owner of a six-star TIE Echelon, I can (somewhat) reliably take on most Executor fleets, giving me a significant boost in capability. I can opt to drop my five-star Executor on defense, knowing that most opponents will have to keep their Malevolence or their own Executor to counter/one-shot. But not everyone has that option. While a great many have dropped hoards of crystals (and cash) to bring the Bounty Hunter capital ship to its peak, it is still without a doubt the singular fleet that players must plan around, falling into the “you don’t have this? Well, you lose” category. This is strikingly similar to how characters like Commander Luke Skywalker, Rey (Jedi Training), Jedi Knight Revan and others used to be in the era before Galactic Legends. Do players load light on defense, and go heavy on offense? Or will they instead drop their best ships on defense, and bank on clearing squads better than their opponent(s)?

Now, here’s the crazy statement that will cause an angry mob of pitchfork-and-torch-wielding players to break down my door: >this update is a good thing. The most painful dynamic of ships and fleets isn’t the Executor, but instead that it is repetitive, boring, and ultimately stagnant, regardless of whatever new content they release. This is likely one of many careful and planned steps to further help Fleets stand on their own, making them less “wow I really do NOT like this game mode but I HAVE to focus on it or I lose,” and more “Oh WOW! They released THAT ship into the game? I’ve been hoping they brought this to the game!” Other steps they’ve recently taken include the addition of the TIE Echelon, TIE Interceptor, MG-100 and most recently, the Outrider for Rebel fleets. Eventually, these and others will add to make full seven-ship faction fleets, but that will take time-and resources.

Putting it plainly – how and why has this not happened yet? As fleets become rapidly more relevant to the game, the lack of loadouts are becoming a serious damper on this half of the game. Having certain loadouts ready to go to easily drop for Grand Arena, Territory Wars, Territory Battles, and especially Fleet Arena only makes sense, and is something players have been asking about for years. This falls under a Quality of Life update that, if not already in the works, hopefully Capital games realizes the need for and meets it.

Now, the largest challenge-fleets being bottlenecked-will only change with time (and new content). There have already been hints about other fleet synergy, scattered through the game for those who pay careful attention.

The first fleet we are likely to get is a full Sith fleet option. Capital ships like Darth Nihilus’ Ravager and Darth Revan’s/Malak’s Leviathan are the most likely candidates, as we have both characters in-game. Since there are already 5 ships with the Sith tag and the TIE Interceptor has Sith synergy as well, by dropping one or two more ships you have a variable and full fleet for a faction yet unrepresented in that area of the game. Sith ships would likely lose their protection and gain that much health, though the ult for such a fleet remains a mystery.

The second fleet is less likely, but more interesting – Galactic Republic Jedi. Led by the recently reworked Mace Windu, and with four ships already holding the tag, it would only take a handful more from characters we have already seen in ships – notably Kit Fisto, Luminara and Barriss Offee. Other random Jedi could also be granted a ship – perhaps the Jedi Knight Guardian could be given a reliable tank ship. A Windu GR Jedi fleet would likely become a staple defensive fleet, with some light touch-ups to his capital ship to speed along, strengthen and lengthen the duration of his ult.

The final fleet speculation came up only recently, with the addition of an Omicron to Jyn Erso’s unique. Players have begun theorizing the addition of Admiral Raddus and Profundity come to the game as a second Rebel fleet, with a strong Rogue One synergy. Raddus’s ult may reflect his sacrifice to the Rebel cause during the Battle of Scarif, which would be an exciting change of pace.

And there we have it! By now, players should be well aware how critical ships are to everyday success in this game. As much as we hesitate to trust CG, we should also hope that they give this half of the game the proper attention we know it deserves.