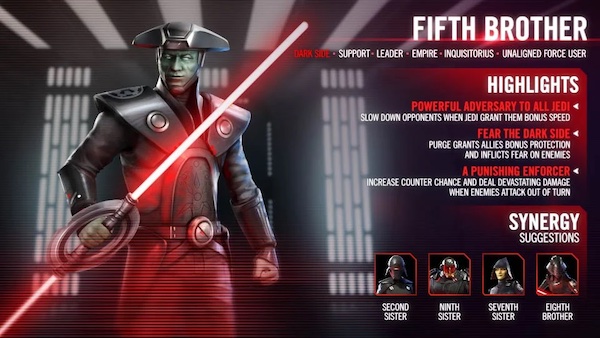 Welcome to the best mods for Fifth Brother, the latest article in our series about the popular game Star Wars Galaxy of Heroes where we take a look at the best mods for SWGoH characters. While I do not claim to have all of the answers in this game, I do my research and have used every toon I write about extensively. These are mod recommendations based on the character’s kit and actual gameplay to help you in your quest to dominate the Galaxy of Heroes holotables. 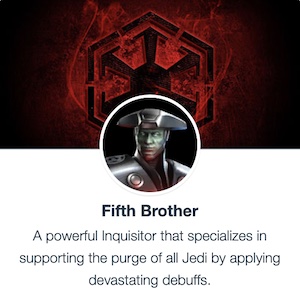 Today’s character to review mods for will be Fifth Brother, the fifth Inquisitor added in Galaxy of Heroes. He is a dealer of Special Damage who has 100% Counter Chance when all allies are from the Inquisitorius faction, and has an anti-Jedi kit and leadership. Let’s take a look at the best mods for Fifth Brother to make him more effective on your roster.

Main Focus: Speed. Another Inquisitorius character with a base Speed of 186 – not much originality in this faction from CG. With a high base Speed like that you could always look at a Speed set, but the Fifth Brother does not feel like one who needs a lot of Speed to be a pain to fight. His ability to debuff enemies on each attack, and his high Counter Chance, make him a great candidate for Potency and Health mods with high Speed secondaries.

Additional Areas to Focus: Potency, Tenacity, Offense and survivability in the forms of Health, Protection and Defense. Potency is a must with this entire faction, and nobody needs it more from the mods than Fifth Brother. He has just 38% base Potency at Gear 13 and above, so load him up with Potency sets and a Potency cross/plus mod. Tenacity will help keep him from being Dazed as you want him to be able to counter enemies regularly, and high Health, Protection and Defense will help him stay alive to keep landing more debuffs and annoy your opponent. Health is specifically more important given his ability to grant Protection Up, a stat that is based off of the character’s Max Health. Additional Offense is nice too, but Fifth Brother is a Support character and not an Attacker, and his base stats cause me to lean more toward high Potency and survivability.

In-game Mod Recommendations: Speed & Health. Interesting that Speed is a top recommendation by the devs at CG. This is not typical on characters who have a high Counter Chance given the extra attacks that can come from the counters, but further testing will help us understand this recommendation better, especially when the Grand Inquisitor joins Galaxy of Heroes.

The “ideal mod setup” can be interpreted a few different ways. If you target Health and Potency mod sets and emphasize the stats mentioned above you should be able to maximize Fifth Brother’s kit. Since the devs recommend a Speed set I will include that as well. Here are my recommendations for the best mods for Fifth Brother: