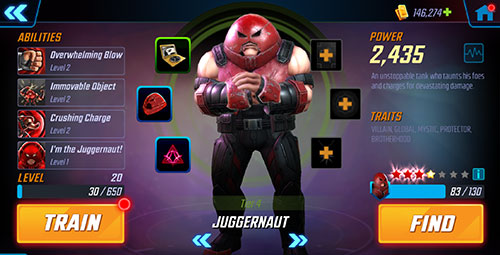 Welcome to the Iso-8 guide for Juggernaut, the latest in our series about the popular game Marvel Strike Force. In this series we look at the best Iso-8 enhancements for MSF characters. While some may refer to Iso-8 as simply “mods” like in other mobile games, we will look to stay true to the naming convention of the Marvel universe and the developers over at Boundless Entertainment. We at Gaming-fans.com certainly do not claim to have all of the answers in this game, but we do our research and look to use every hero and villain we write about extensively. These are Iso-8 recommendations based on the character’s kit and actual gameplay to help you in your quest to dominate in Marvel Strike Force. Note that these Iso-8 classes may differ from one team makeup to another, so feel free use this as guide knowing that these can change in differing situations within MSF’s gameplay.

Today’s character to review is Juggernaut. One of two taunting tanks commonly used in the Brotherhood faction, Juggernaut is a Villain, Global, Mystic, Protector in MSF. Let’s take a look at the stats we want to focus on enhancing through Iso-8 modifications in Marvel Strike Force.

Main Focus: Like his fellow Brotherhood teammate Blob, Juggernaut is a defensive character who gains taunt when he uses his Immovable Object special. As a result you will want high Armor and Health stats to keep Juggernaut alive and taunting to soak up the damage and keep his allies on the attack.

Juggernaut is designed to eat up enemy attacks while keeping debuffs away. but his Crushing Charge ultimate was quite powerful when Magneto and Juggernaut were dominating the game. But like most teams in games like MSF, the power creep leaves them behind unless a new character revitalizes them or they get a new faction/team to play with. The way Juggernaut’s kit works in Marvel Strike Force, there are only two class options that make sense – the Healer class or the Fortifier Class. This is where the team composition plays a huge role in the Iso-8 use, but honestly both should be effective for Juggernaut and this will come down to personal gameplay preference.