Welcome to the Best Mods for Sun Fac – the latest article in our series about the popular game Star Wars Galaxy of Heroes where we take a look at the best mods for each SWGoH character. While I do not claim to have all of the answers in this game, I do my research and have used every toon I write about extensively. These are mod recommendations and they are certainly not the only option. However we look to help players maximize their characters in SWGoH and we are always open to feedback if you have a mod setup that works well of your gameplay.

The hardy Geonosian tank Sun Fac is great for countering (pun intended) many of the annoying threats in the game without sacrificing a space for an otherwise sub-par toon. While his place in the Arena was short-lived, he has a ship that is used frequently with General Grievous and his Capital Ship, The Malevolence. With the need for Geonosians, and strong ones at that, in the Geonosis Separatist Might Territory Battle, under a Geonosian Brood Alpha lead it has made a well-modded Sun Fac quite relevant in SWGoH through 2020 and into 2021. Let’s take a look at how best to mod Sun Fac to get the most out of this Geonosian tank.

Main Focus: Sun Fac can taunt, counter, and his basic attack, Browbeat, can dispel, so increasing his low Speed is important. 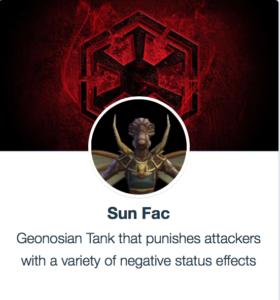 But the addition of Geonosian Brood Alpha took away the need for an extremely fast Sun Fac as the GBA’s summons of a taunting Geonosian Brute covers that area. As a result I would focus on survivability in the forms of Health and Defense as the main areas of focus. His Hive Mind unique grants him Health Up, Health Steal Up and Defense Up whenever Sun Fac taunts, plus all Geonosians gain +15k Health and Protection plus +50% Health Steal under a Geonosian Brood Alpha lead.

Additional Areas of Focus: Protection, Tenacity, Potency and Speed. Additional survivability from Protection and even Tenacity are good areas to boost to prolong Sun Fac’s time in battle and allow him to keep using his special attacks. Sun Fac continues to have one of the highest base Protection numbers in the game, so percentage based Protection upgrades remain a great boost to this character. Potency must not be overlooked with this character. Sun Fac needs high Potency to land the Offense Down and remove TM from Subjugate and Stagger, Blind and Daze, all incredibly powerful debuffs, from Spiteful Strike. Finally, Sun Fac can taunt, counter, and his basic attack, Browbeat, can dispel, so increasing his low Speed is helpful.

Speed Priority: 2/10 – A fast Sun Fac is no longer as important as it was before GBA was added to SWGoH, so even your strong Speed secondaries are better used elsewhere.

In-game Mod Recommendations: Defense. Prior to Mods 2.0 I guarantee that the in-game recommendations would not have been Defense, but the changes to Defense mods have made them fantastically relevant. Thus, look for good Defense and Health mods for Sun Fac to keep him absorbing hits while Geonosian Spy and Geonosian Soldier take care of the offense under a Geonosian Brood Alpha lead.

Would you mod him differently if you were going to use him strictly as a crew member?

Yes – I would just make sure he has six 5-dot mods that are maxed out (level 15) if used only for Ships.

I was thinking maybe a set of offense and potentcy