Welcome the latest in our series about the popular game Star Wars Galaxy of Heroes where we take a look at the best mods for individual SWGoH characters. While I do not claim to have all of the answers in this game, I do my research and have used every hero I write about extensively. These are mod recommendations based on the character’s kit and actual gameplay to help you in your quest to dominate the Galaxy of Heroes holotables. 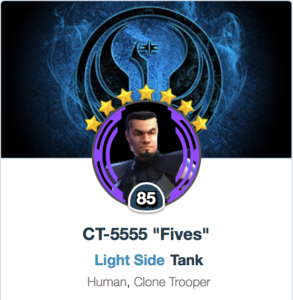 Today’s toon to review mods for will be Fives (CT-5555), one of the easier toons to farm in early stages of Star Wars Galaxy of Heroes. During the Clone Wars this guy figured it all out – that Chancellor Palpatine was a bad guy and that the clones were programmed by their inhibitor chips to do as commanded. So this whole Empire thing could have been avoided had he not been framed for trying to kill Palpatine…

For the purpose of SWGoH, Fives was an early player in the Arena battles and continues to serve an important purpose albeit his value has been a bit of a roller coaster over the years. Used correctly, CT-5555 was a very valuable member of your Heroic AAT team for Phase 2 or Phase 4 alongside his clone brothers in the early days of that game mode (think late 2016 and early 2017), and while his ship kept him somewhat relevant after HAAT was no longer the hot item, the August 2019 Clone rework has his value rising again. With the new 501st tag to represent his time in the 501st Legion, Fives synergizes even better than before with others including Rex, Echo and now Ahsoka Tano.

Main Focus: While Fives has always been a tank in the game, the first time I remember his taunting was alongside General Kenobi. However, the August 2019 rework “at the end of his turn if no Allies were Taunting, Fives Taunts for 2 turns.” As a result we now need to mod CT-5555 like the tank he is now designed to truly be. Thus, Defense is where I would recommend you focus your modding efforts for Fives. When Echo is present he has +100% Defense when Taunting, so beef this up and make him a meat shield to protect your other 501st and Clone allies.

Additional Areas to Focus: Potency, Offense, Tenacity & additional survivability in the forms of Health and Protection. Potency is a must given the need to get Speed Down on the opponent which can trigger double attacks from his basic. Speed is not an area to worry much about given Fives gains 15% Turn Meter when his Clone or 501st allies take damage and he has 85% Counter Chance, but you need the Zeta on his Domino Squad unique to get the 15% TM gains. Offense will help him hit harder, and survivability in the forms of Health and Protection will ensure that he stays alive longer as well. Note that his Tactical Awareness unique grants Fives’ Speed, Max Health, Max Protection and Offense stats to his 501st Clone Trooper allies when one of them is “defeated.” It now reads that Fives will instead be defeated and grant those stats to his buddies. On paper (or digital screen if you prefer), this looks like an amazing ability, but you will again need a Zeta to max this one out. Finally, Tenacity is needed to keep debuffs like Buff Immunity, Daze, Shock, etc.

In-game Mod Recommendations: Defense & Tenacity. Defense is a must-have with Fives now after the Clone rework and addition of the 501st tag, but I feel Tenacity could be traded out with Health or Potency if you have enough Tenacity gained from secondary stats.

Since Fives is one of the easiest toons to farm early in the game, many may just put some of their early mods on him and let him be. However, as you progress through SWGoH and get far beyond worrying what level you are on and group him with Echo, Rex and now Ahsoka, Fives can be quite a “force” (pun intended). Here is my recommended approach to modding CT-5555 in SWGoH:

SWGoH: B1 Battle Droid’s “Droid Battalion” Unique, and How it Works

[…] be Echo (CT-21-0408), one of the hardest toons to farm in Star Wars Galaxy of Heroes. Like Cody, Fives, and the Clone Sergeant reviewed yesterday, Echo can prove to be a very valuable member of […]