With General Veers at the center of the newest Star Wars Galaxy of Heroes update leading up to May the 4th, we decided it was a good time to take a look at the best mods for this Empire support character. While I do not claim to have all of the answers in this game, I do my research and have used every toon I write about extensively. 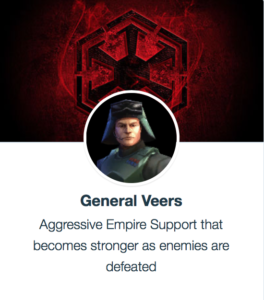 General Veers is described by SWGoH as an aggressive Empire support that becomes stronger as enemies are defeated. A rather mediocre toon prior to his April 2017 rework, his new ability enhancements and Empire synergy with those with the Imperial Trooper tag have added to his value significantly.

Main Focus: Speed and Potency are the two main focuses for Veers, but Speed seems the best way to go. He has a 70% chance to grant himself and a random Imperial Trooper speed up on use of his basic, Daring Attack, which is intriguing given the speed up buff adds +25% speed. Thus, if Veers enters the battle at 200 speed and you gain speed up he jumps to 250 speed. That could be pretty awesome and difficult to deal with.

Additional Areas to Focus: Potency, Offense and survivability. Potency is pretty obvious, however if you run General Veers under a Emperor Palpatine lead, remember that you get a 32% Potency boost. I can see him being used much like Boba Fett is used in the Arena. If Veers has a great speed number, he starts the battle with his AOE, where you need the high potency to inflict the Ability Block while gaining assists from those with the Imperial Trooper tag – and the battle then resumes with multiple enemies blocked from using special attacks. Because of his (expected) high speed from above, adding offense (or a CC/CD combo) and survivability (defense, health and protection) will make him last longer in battle and continue to boost Imperial Trooper allies.

The mod strategy for General Veers could go a couple of different ways. I could see the argument for 6 Potency mods, 4 Speed and 2 Potency mods or a combo of Health/Defense and Potency mods. Even a combo of CC/CD mods with a 24% Potency plus makes a lot of sense. Here is my preferred mod setup for General Veers, given the use of mods that are more likely available in your lineup: