Welcome to the Geonosian Soldier mods guide, the latest article in our series about the popular game Star Wars Galaxy of Heroes where we take a look at the best mods for each SWGoH character. While I do not claim to have all of the answers in this game, I do my research and have used every toon I write about extensively. These are mod recommendations and they are certainly not the only option. However we look to help players maximize their characters in SWGoH and we are always open to feedback if you have a mod setup that works well in your own gameplay.

The Geonosian Soldier is one of five Geonosian characters in Galaxy of Heroes and is an important part of the Separatist Might Geonosis Territory Battle. While I anticipate a rework to make the Geonosians stronger on offense in the coming months, the addition of the Geonosian Brood Alpha and his fantastic leadership stat boosts have made the faction much more viable already. Let’s take a look at the best mods for the Geonosian Soldier to maximize his rather simple and bland kit. 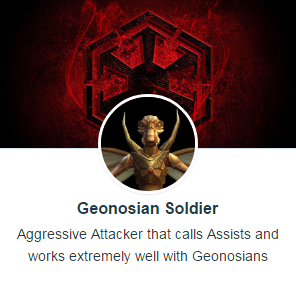 Main Focus: Geonosian Soldier’s reworked unique, Hive Tactics, gives him 25% Turn Meter whenever he scores a critical hit after first granting all Geonosian allies +15% Critical Chance. So your primary focus should be on Critical Chance and Critical Damage, to quickly increase how hard, and how often, you hit.

Additional Areas of Focus: Critical Damage, Speed, Potency, Offense, Health and Protection. Speed is an essential stat in SWGoH, so do your best to boost his base Speed which is very strong at 174. Given the high Speed stat, it is not entirely crazy to consider a set of four Speed mods and possibly a CC focus on the triangle, but I would have to have some amazing Speed secondaries to consider this over CC and CD mods. However, I have personally tested this out and do not prefer a Speed set on Geo Soldier as they are better used on other characters. Note that a look at the Geonosian Soldier’s Relic upgrade shows that once he gets to Gear 13 and the Relic stats increase he ends up with a base CC stat of 84.21%, and his unique gives him an extra 15% Critical Chance, taking his total to 99.21%. As a result, once you get him to Gear 13 and the Relic levels increase, switching away from CC to more Potency and survivability would is an option. Potency is needed to inflict Tenacity Down on his basic. Offense is desirable simply to boost his attack power. Being an older character, Geonosian Soldier has lower survivability than newer toons, so boosting defense, health and protection is a must. Under a Geo Brood Alpha lead all Geonosians have +50% Health Steal and recover Protection, so boosting both of these stats is a good move.

Speed Priority: 5/10 – Geonosian Soldier is already faster than most in SWGoH and I do not recommend using top-tier Speed mods on him.

In-game Mod Recommendations: Critical Damage & Critical Chance. I have no disagreement here, however at Gear 13 and higher Relic levels, as mentioned above, CC becomes less of a need. I want to note that I have tested the Geo Soldier with a Speed set of four and a CC set with a CC-focused triangle to maximize his Speed. Honestly, outside of the Geonosian Spy this team lacks much punch, so I have since transitioned back to more offensively-driven mods with solid Speed secondaries.

If modded correctly, the Geonosian Soldier is a Separatist character who can help add depth to any roster and be quite effective in the Geonosis Territory Battles, on specific counter teams in Territory Wars and the Grand Arena Championships. Overall, I believe the ideal mod setup for Geonosian Soldier is (note to use a full CC set of 2 CC mods and a full CD set of 4 CD mods);