UPDATE: Everything Old is new again. 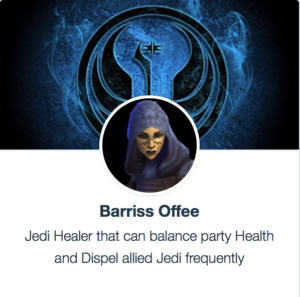 We all know that Speed is hugely unbalanced, and the faster team usually wins. But what happens if you can’t kill anyone in those first 3-5 actions of your squad? Well quite simply the playing field tilts towards strategy and away from a high burst damage. With both Kenobi and Barriss working together the survivability of a team goes through the roof. With the constant healing and high defense it takes a coordinated effort to kill General Kenobi, who taunts a lot, or Barriss Offee, who is the source of all the healing.  This means that when your team is slower, you don’t start with one or two members of your squad dead before you can even begin – you have time and opportunity to let your squad do its work.

Swift Recovery: At the end of each of her turns, Barriss dispels all debuffs from the debuffed ally with the lowest Health and gains 10% Turn Meter for each effect removed.

Whenever an ally is Critically Hit, that ally recovers 20% of their max health and Barriss gains 10% Turn Meter. This effect is disabled while Barriss is defeated.

The key of course to this Zeta is the critical hit activation. With many teams relying on a high critical hit chance to have the largest effect this at worst softens the total damage your team takes, and in some instances can completely negate it.

Where this Zeta works: This Zeta works anywhere that you can also use General Kenobi as a lead – the Squad Arena, Territory Battles, or Territory Wars.

While the team is easily countered with Darth Nihilus, or extremely high damaging toons like a properly modded Ezra, or Han Solo, it does take a proper strategy and careful planning to get around the powerful defense of Kenobi and Barriss.

Squad Arena: My current Squad Arena team is General Kenobi, Barriss, Hermit Yoda, Commander Luke Skywalker, and Darth Nihilus. Most fights end with my team at or near full protection because of the constant healing of both Barriss and Hermit Yoda. Commander Luke, and Darth Nihilus provide more than enough offense for the early rounds, and by the end of the match with Master’s Training both General Kenobi and even Barriss are doing respectable damage.

It is a sad truth that nothing holds on defense anymore, but teams will on occasion time out versus this squad, and if your team can kill their Nihilus before they kill your Barriss then a win on defense is almost certain.

Rancor: There is still no real place for Barriss in the Rancor Raid, with Commander Luke out there a solo is very easy anyway.

AAT: Similar to the Rancor there is no really good team where you want Barriss in the squad against the AAT, the survivability she grants does not matter once enrage hits, so teams with other mechanical are still much better.

Territory Battles: For the light side version of Territory Battles Barriss and General Kenobi will give you one squad that should always go 6/6. Couple that with a resistance squad and a strong rebel squad and you really wont be letting your guild down with your performance.

Territory Wars: If you can bury these teams later into a zone after your opponents have exhausted their Darth Nihilus teams then you stand a very good chance of holding some territories. Yes this team can be beaten, but its not easy especially without Nihilus to help.

My use of Zeta Barriss: She is currently a mainstay in my Arena squad, and she gets heavy use in both Territory Battles and Territory Wars.

My Rating of Zeta Barriss: This has become one of the best Zetas in the game, while not great in raids, Barriss is deserving of a 9/10 – it is, simply put, a character that will compensate for a lack of speed mods in arena, and will help you coast through Territory Battles while frustrating opponents in Territory Wars.

[…] are a ton of fun in the Arena, but they do get stumped by two configurations, 1st being a team with Zeta Barriss, with all the critical hits the Clones can land, and the high number of attacks they have, you […]

[…] below average and while hitting harder is always a good thing, spending Zeta on an ability that a Zeta Barriss can basically counteract is a hefty price. I am trying to reserve a 10/10 for the best of SWGoH, […]