For a long time, Darth Vader was one of the hardest SWGoH characters to obtain, with shards (rarely) appearing in the shard shop, and as achievement rewards. However, despite having a powerful set of abilities, Darth Vader was underwhelming to use. Eventually however, he was added to the Fleet Store, and given a Zeta upgrade, providing a much needed boost. 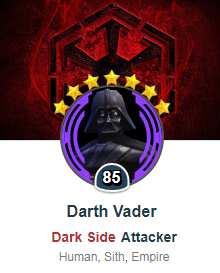 The description of Darth Vader’s zeta’d leader ability, Inspiring Through Fear, is; “Empire and Sith allies gain 30% Offense and have a 50% chance to remove 20% Turn Meter when they damage and enemy. This Turn Meter removal can’t be Resisted. While Darth Vader is alive, enemies immediately regain Damage Over Time for 2 turns whenever Damage Over Time expires on them.”

The Zeta itself increases the TM reduction chance by 25%, the TM reduction by 10%, and causes enemies to regain DOT debuffs as soon as they expire or are removed. Both the turn meter reduction and infinite DOT’s are great, but unfortunately, you can’t take full advantage of both at once.

If you choose to run zVader with a DOT team, the two major counters you’ll come across are burst damage and Tenacity Up (for example, Rex teams and teams with Yoda). Tenacity Up because it prevents the damage over time effects from being applied in the first place, and burst damage because once Vader is dead, the DOTs no longer replenish.

If you take the TM reduction route, the major limitation will be Vader’s mods – speed, specifically. Because you’re aiming to control the battle using TM manipulation, you need to be getting the first hits, and hitting often enough to keep the enemy threats at bay. A team that outspeeds you, or that can interrupt your attacks, will quickly derail your strategy and lead to defeat.

Gameplay: Darth Vader is great fun to play with if you like seeing big Culling Blade numbers, and adding his Zeta just makes them bigger. With the right mods and RNG, a TM removal team can lock the enemy out, and a DOT team can quickly set up one shot kills on any enemy.

Squad Arena: Darth Vader’s already past his prime in the arena – the Rex, zQGJ, and zMaul metas all put an end to it. However, zVader teams can still be effective in the higher ranks, just make sure you plan ahead and are ready to change once you start hitting walls.

Rancor: Despite the bug fix to stop the TM reduction from Darth Vader’s leader ability from stacking, it’s still possible to do mega damage with the right team composition, and to do decent damage without. Of course, there are teams that can do decent damage without investing precious Zeta materials, so unless you’re planning on running a super team, or using zVader elsewhere, it’s probably not worth it.

AAT/HAAT: Zeta’d Darth Vader is a massive liability in Phase 1 of the Tank raid. Because Greivious gains 100% turn meter every seventh time he takes damage, stacking DOTs can quickly turn into an unstoppable chain of attacks that will quickly kill your team.

In Phase 2 on the other hand, zVader can do amazing damage with a DOT team. The side and top turrets take full damage from DOTs, letting you topple the tank easily, as well as setting up massive Culling Blade blows.

Territory Battles: Darth Vader is required as leader in a special mission, so adding the zeta will always be helpful. However, I found the TM reduction negated by the crazy TM gains the Rebels have, and Vader to be too slow (comparitively) to take advantage of permanent DOTs. Further decreasing the usefulness of the Inspiring Through Fear zeta, it adds nothing in the way of survivability, which is essential for Territory Battles.

Territory Wars: As mentioned, there are many common counters to zVader teams in PvP, making him a poor defensive choice in Territory Wars.
Offensively, Vader is outclassed by other Sith and/or Empire leaders, so it’s not worth using him with your best toons. He can, however, be an effective leader for a secondary Empire and/or Sith team, especially against weaker defenders.

How I Use Darth Vader: I occasionally use zVader in my Rancor team, but we vary what characters and teams are allowed, to try and keep it interesting. I run zVader teams in Phase 2 HAAT (unless I feel like dusting off the droids), and I keep him on my GW bench, in case I need another team. But realistically, I don’t use Darth Vader often anymore.

My Rating of Vader: I rate Zeta Darth Vader as a 6/10. While Vader was the first character I Zeta’d, and I don’t regret it at all, his usefulness was short lived. I found he quickly fell behind in the arena meta, and needs niche, hard to obtain toons to be used to his full potential in raids.

SWGoH: Darth Revan is coming to Galaxy of Heroes

The Squad Arena Team that Vaulted Me back atop my Shard -

[…] range consistently before finally dropping Maul as my leader in mid-June. After a 2-week run with Zeta Darth Vader leading the team once again which saw me struggling to stay in the Top 10, I decided to click a […]

[…] Zeta does not impact the use of Darth Nihilus against the Rancor, he is an effective character on Zeta Darth Vader Rancor solo […]

[…] Rancor: Darth Maul isn’t suited to the Pit raid. Devour can’t be evaded, stealth will be dispelled, and the turn meter boost on the first turn doesn’t do much.  You’re much better off taking Maul out of the leader position and using zVader. […]

[…] the Rancor make Zader even more fun. My preferred lineup, pre-Thrawn, to solo the Rancor, was Zeta Darth Vader lead with Qui-Gon Jinn, Emperor Palpatine, Darth Nihilus and Jyn Erso, however I always wanted an […]

[…] Wampa as a debuffer, Potency will be an important stat to stack up on. If you’re running with a Zeta Darth Vader, one of Wampa’s few synergies, he can help out zVader with his Damage Over Time debuff on basic. […]

I believe the correct answer to this is “To Be Determined.”

SWGoH GameChangers: The Month of the Sith? New Sith Character to be Added - Gaming-fans.com

[…] Health Steal on each attack. For those smart enough to farm Wampa hard, pairing him with a Zeta Darth Vader lead and Sith Marauder could be a “game changer” for your […]

[…] during the days of the Galactic Empire, playing a key role in the genocide of the Jedi Order. In SWGoH Vader’s Zeta ability, Inspiring Through Fear makes him a great leader, but even without it, he can fit into Sith and […]

[…] When the best Heroic Tank Raid teams began to be publicized, EE also saw a boost in popularity on a Zeta Darth Vader team as the healer and for his ability to dispel debuffs. However, Ewok Elder is designed to be an […]