How many times have you had an arrow mod drop, only to be disappointing when you read ‘accuracy’ on the primary? A lot, I’m sure. Perhaps worse than getting an accuracy arrow in the first place, is knowing how good they could be.

What Does Accuracy Do? 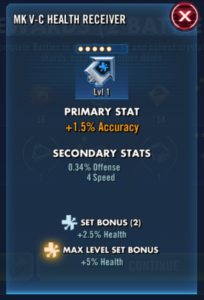 Accuracy, like potency against tenacity, is a direct counter to evasion. 12% accuracy, the maximum amount gained from a mod, will negate 12% evasion. This isn’t a small amount. Especially since the only way to increase evasion is through abilities and buffs. Evasion Up buffs in SWGoH give 15%, as do most leader abilities. The glaring exception is zMaul, who boosts evasion by 20%. So those pesky Sith teams would drop to 8% evasion, instead of 20% against any character using a mod with an accuracy primary. That’s less than half as many dodges.

Why Isn’t It Used Then?!

The problem is speed. In the current state of the game, speed reigns supreme. Almost every character needs as much as they can get, and losing a 30 speed primary for an accuracy one hurts. A lot. Eventually however, this will change, and speed wont be the most important stat anymore. When this happens, accuracy may just be the best primary stat on arrows. Until then, try not to be too dissapointed.