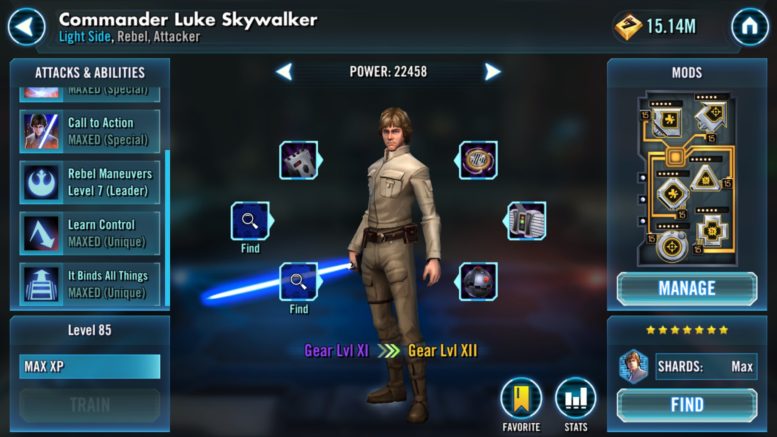 Luke Skywalker. The hero of the Star Wars trilogy, and now finally a part of Star Wars Galaxy of Heroes. Certainly an elite character in SWGoH, Commander Luke is also the first to feature three Zeta Abilities. 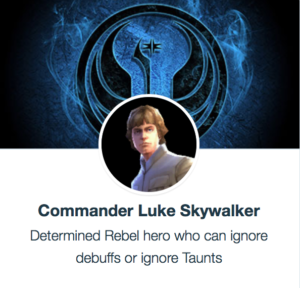 The next Zeta is on his first Unique ability, Learn Control, and reads “While Luke doesn’t have Call to Action, he has +50% Counter Chance, +50% Critical Avoidance, +50% Defense, +100% Tenacity, and gains 10% Turn Meter whenever another Rebel ally takes damage.” The Zeta adds the +50% Critical Avoidance and +100% Tenacity when Luke doesn’t have Call to Action “turned on.” Thus, his defensive option makes him tanky which is awesome since survivability is one of the areas I mention to focus on in the Best Mods for Commander Luke Skywalker article.

The final CLS Zeta Ability is on his second Unique stating that “Luke has +40% Potency. Whenever Luke Resists a detrimental effect he recovers 5% Health and 5% Protection. Whenever Luke inflicts a debuff he gains 10% Turn Meter and other allies gain half that amount.” The Zeta adds the 5% Protection recovery along with the 10% Turn Meter gain whenever he inflicts a debuff, both of which help in survivability and the chance to take another turn quickly.

Gameplay: Using CLS is a lot of fun. At first, I did not use his Use the Force special enough as I was looking only to dispel buffs. But the Turn Meter reduction and overall power of that attack are both very helpful and if you can land Tenacity down on opponents it sets up the basic attack nicely. Often, I use the special to start a battle and remove TM or dispel a taunt, then use Call to Action to setup the offensive mode and then the basic immediately, thus effectively reducing the cooldown of Use The Force. The leadership Zeta is more about who you place around CLS than anything. I face Squad Arena teams with CLS as leader and R2-D2, Han Solo, Princess Leia, Baze Malbus, Chirrut Imwe and Fulcrum Ahsoka as well as General Kenobi, Darth Nihilus, Barriss Offee and Grand Admiral Thrawn consistently, however only R2-D2 and Baze inflict debuffs from this group. In Territory Battles, I like to surround Commander Luke with more Rebel characters who do inflict debuffs regularly to get the Turn Meter gain.

Squad Arena: Personally, I use my Zeta CLS as the leader of my Squad Arena team which places Top 5 consistently, Top 3 when I have time to play at payout. I still need to put a Zeta on his leader ability, but the +50% Critical Avoidance and +100% Tenacity when Luke doesn’t have Call to Action “turned on” are nice for battles when I am not using his offensive mode. While I prefer the offensive-minded Commander Luke, the 5% Protection recovery along with the 10% Turn Meter gain whenever he inflicts a debuff not only help keep him be more tanky and hard to defeat, but any experienced player knows the value of Turn Meter manipulation in SWGoH. Having the 10% gain on many of his attacks AND the gain his allies get puts you at a huge advantage when non-CLS teams are against you. The TM gain from the leadership Zeta is helpful, but not essential to my Squad Arena team as only CLS and Baze inflict debuffs on my team.

Rancor: Videos surfaced of Commander Luke Skywalker soloing the Rancor within hours of his release and my Guildmates have been quite impressed as well. I have yet to try this and likely will not given the dynamic of our Guild, but if soloing the Rancor all the time is your thing then have at it. The ability to ignore taunt, remove TM and regain Protection all play well into the ability to crush the Rancor. The leadership Zeta really does not impact this greatly, but it certain is not a hinderance.

AAT/HAAT: While the Tank Takedown Raid does not have the same excitement as it once had now that I have General Kenobi at 7-stars, I am quite aware that not everyone is in that same boat. That is why I was helping an allied Guild topple HAAT on their own at the original writing of this piece. CLS is not only the best character in the game, but he is also the best in Raids by far. Near solos and 1+ million scores in p1 of HAAT are frequent, and p2 and p4 of HAAT also see Commander Luke perform well. P3 is where I have personally seen the most success together with Teebo, Jyn Erso and Chaze, topping 2 million rather easily. While the leader Zeta is again a nice to have, it is certainly not a must-have for HAAT success.

How I Use zCLS: My use of Zeta Commander Luke Skywalker is as a lead in the Squad Arena with Chirrut Imwe, Baze Malbus, General Kenobi and Grand Admiral Thrawn. The three Zetas provide an advantage of sorts and add to his overall power, and they definitely help make him more effective. Many others in my (December 2015) shard run CLS with R2-D2, Han Solo, Chaze, Barriss Offee, Darth Nihilus and even Princess Leia, each of which forcing a different strategic offensive approach.

My Rating of Commander Luke’s Zeta Unique Abilities: My rating for Zeta Commander Luke’s three abilities are a 5/10 on the unique Learn Control and a 7/10 on the unique It Binds All Things. On the leader ability Rebel Maneuvers, I give this one a 6/10 as well, of course base on the team used around CLS. Note that this does not necessarily mean any of these are better than the others, but I do not use Commander Luke in defensive mode much, thus the added Crit Avoidance and Tenacity are less valuable to my (aggressive) style of play with CLS. While these do not qualify as the Top Zeta Abilities in SWGoH, if you run Commander Luke with the right characters around him it will increase the value of his Zetas and only adds to one of SWGoH’s top ranked characters.

[…] the Call To Action ability and he is extremely valuable with or without Zeta materials used. For a review of Commander Luke Skywalker’s Zeta abilities please check out my article on the topic. Thus, you can mod him a couple of different ways. Based […]

Since you’ve used CLS as leader in your squad arena I’m curious as to your in depth opinion on his leader ability. Do you feel like the counter chance makes a difference in battle? Also what’s your opinion on utilizing old Ben in that squad since his rework makes him more effective?

I have not used him with Old Ben much at all, but I do find the Leader ability counters are a nice plus. Anytime you can get extra attacks it is good, and since CLS hits hard with his basic it is very effective. While not as effective with Baze or Chirrut’s basic attacks, it is still nice to get the extra hits in.

I am considering the leader zeta, and I think your review may have overlooked some benefits.
1. I think TM reduction is considered a detrimental effect. If you don’t land the TM reduction against one toon, your whole rebel team gains TM.
2. Lots of arena teams us TM reduction toons (CLS, Raid Han, Rex, et al).
3. Raid bosses that are immune to TM reduction and have high tenacity (Sith raid) should see big gains.
4. Recent upgrades to debuff-heavy toons have made them more viable in all areas (EP, Vader), and are integrated into arena teams now too.