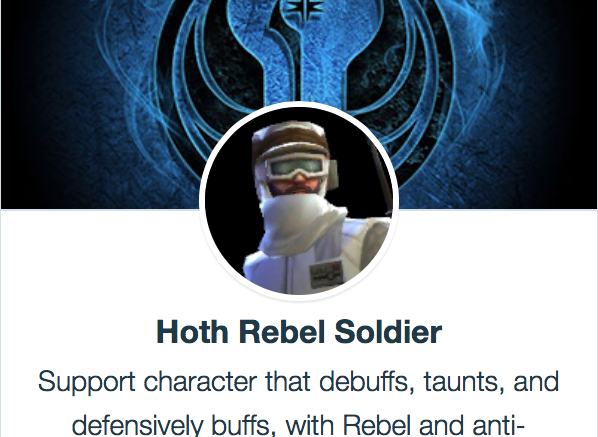 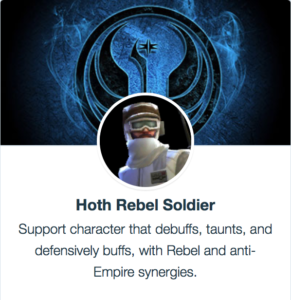 Today’s toon to review mods for is the Hoth Rebel Soldier. Not to be confused with Hoth Rebel Scout, HR Soldier is another Rebel character who is often overlooked due to having little use in the game to date. However, that has  changed to an extent since the launch of SWGoH’s game mode Territory Battles. While Hoth Rebel Soldier was not one I had used a lot due to his bland kit, I obviously use him in Territory Battles: Rebel Assault like everyone else.

Main Focus: Survivability, specifically Health and Defense. Hoth Rebel Soldier is a character that is designed to draw enemy fire to protect his teammates, so the focus should be on keeping him alive as long as possible with Defense and Health first, then on Protection.

Additional Areas to Focus: Speed, Potency and Critical Chance. I am going with Speed here simply because it is so important in this game and the goal of any taunting tank is to get them to taunt as soon as possible, thus adding Speed to Hoth Rebel Soldier is a must given his snail-like 98 base speed. His basic can inflict the Offense Down debuff on any non-Critical hit and will inflict it on any Critical hit so both Potency and Critical Chance are also areas to focus. One could make the argument for Critical Damage, but with HR Soldier being a low offense toon, I would recommend saving your high CD triangles for characters who can hit significantly harder.

In-game Mod Recommendations: Health. Once again, I feel like a deeper dive is needed for these in-game recommendations, and that is what we do here at Gaming-fans.com. Saying “Health” and nothing else is really ignoring a major area of focus for all tanks and specifically this character’s kit that is enhanced through his Rebel Momentum unique – Defense. Every time a Empire enemy is defeated Hoth Rebel Soldier gains Defense Up for 2 turns – this is going to be more effective if he has high defense already, and with the changes from Mods 2.0 the value of Defense mods is much higher.

This is close to how I have mine modded (I have protection on the cross). I’d farmed him since day one as he was my first pack pull that wasn’t scripted. I have him at 7* G11 and I use him in my P3 HAAT squad with Tebo, Jyn, TFP, and DN (still working on Baze). Really hoping he gets reworked.

If indeed both Hoth Rebel toons are featured or required for specific missions in Territory Battles, then I would have to think a rework makes sense.

[…] for is the Hoth Rebel Scout. A somewhat overlooked Rebel character who looks almost exactly like Hoth Rebel Soldier, I farmed him early to unlock Emperor Palpatine in the Emperor’s Demise event (long before […]