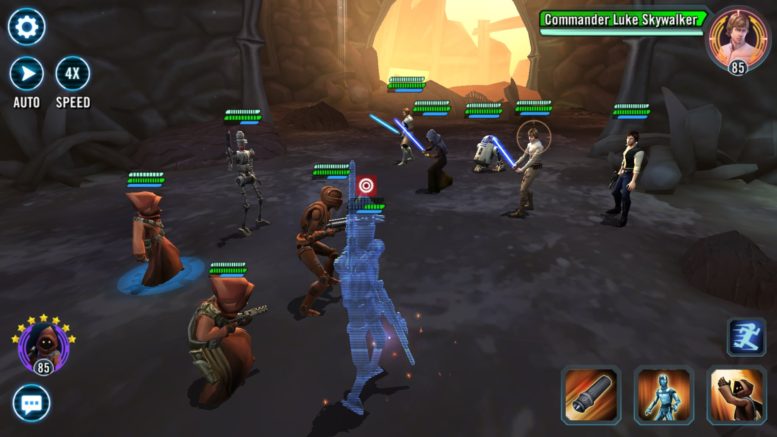 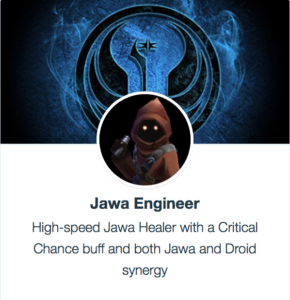 Today’s toon to review mods for is the Jawa Engineer. A tougher farm available 5 shards at a time in the Shard Store and through special events, Jawa Engineer is a key member in a Droid/Jawa team commonly used in Phase 2 of the Heroic AAT Tank Takedown Raid. While his healing ability is nice and the ability to revive droid allies is also, his ability to grant Critical Chance Up and Turn Meter to allies is what makes him irreplaceable. Let’s take a look at the best mods for Jawa Engineer to maximize his effectiveness in SWGoH.

Main Focus: Speed. Java Engineer is already fast with a 153 base Speed, but Speed is the one constant in Star Wars Galaxy of Heroes – without it you cannot be competitive. Look to get Jawa Engineer over 200 and upwards of 220 to really maximize his abilities to help your droids do damage. Remember, his Crunch Time unique grants him +10 Speed for each Jawa or Droid ally, so that 220 Speed will be 260 if you run him in the standard HK-47 lead, IG-88, IG-86 and Chief Nebit team in p2 of HAAT.

Additional Areas to Focus: Potency and survivability – specifically health. Potency will boost the chance to apply those pesky little Detonators to the heads of your enemies with his basic. Meanwhile, Health is more important than protection because his special, Patch Up, allows allies to recover 30% Max Health when used. Thus, 10k Max Health would gain 3k from the healing special while a Max Health of 15k would gain 4,500 from the same use – protection is not recovered. Finally, since Jawa Engineer is rather squishy I also recommend some added emphasis on defense to help him survive long enough to use his heal and TM granting specials.

I recommend the use of four Health and two Potency mods on JE with as much Speed as possible. Thus, here is my recommended (ideal) approach for mods on Jawa Engineer: