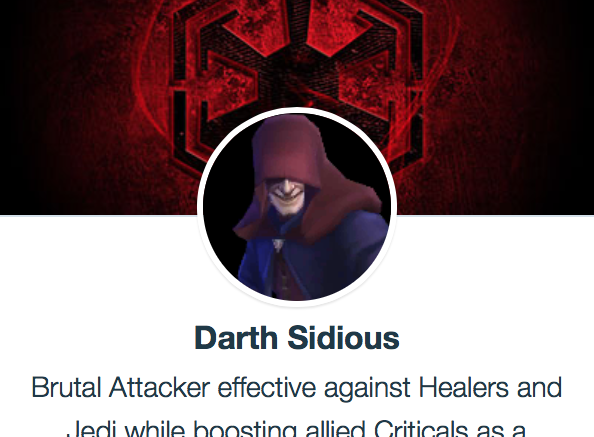 Welcome to the best mods for Darth Sidious, another article in our series about Star Wars Galaxy of Heroes where we take a look at the best mods for individual characters. While I do not claim to have all of the answers in this game, I do my research and have used every character I write about extensively. These are mod recommendations based on the character’s kit and actual gameplay to help you in your quest to dominate the Galaxy of Heroes holotables. 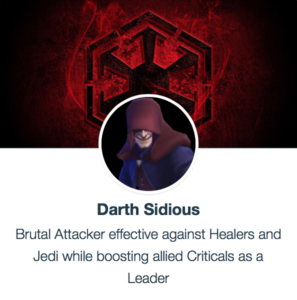 Today’s character to review mods for will be Darth Sidious, a strong Free To Play (FTP) Dark Side character in the early days of SWGoH, Sidious is an easy farm in the Squad Arena Store. Featuring a basic that can inflict Healing Immunity and a powerful AoE attack that can land Expose, Darth Sidious was a popular choice to unlock and utilize early in Star Wars Galaxy of Heroes. His value for higher-level players is in an all-Sith squad and a Zeta Ability was added in 2017 to strengthen his Survivability and make him slightly more relevant, but the December 2021 Omicron ability addition has Darth Sidious looking like a real challenge in Territory Wars moving forward.

Main Focus: Speed. With a base Speed of 181, Darth Sidious is one of the faster characters in the game and thus, Speed mods should definitely be in play. With the addition of his Omicron ability however, I now feel that a full set of four Speed mods with high Speed secondaries are a must. The Omicron reads, “While in Territory Wars: If all allies are Sith at the start of battle, Sith allies gain Max Health equal to half of Darth Sidious’ Potency until the first time he is defeated (excludes Galactic Legends). When Darth Sidious uses Demoralizing Blows, the cooldown of the ability is reduced by 1 for each other Sith ally and Darth Sidious gains 50 Speed for 4 turns.” If you can get your Sidious around 300 Speed and add 50 Speed for those turns, this will allow him to use his AoE over and over again in TW and really cause problems for your opponent.

Additional Areas to Focus: Potency, Survivability, Critical Chance, Critical Damage and Offense. Potency is key for Darth Sidious both his basic and special attacks can place debuffs on his enemies. Survivability is very important with Sidious since he is quite squishy, so aim for increased defense, health and protection secondary stats from your mods. Health is the most important of these because he recovers 20% of his Max Health whenever an enemy until is defeated. Investing into Critical Chance and Critical Damage is important to have him hit harder, but if you choose to use him as a leader the value goes up significantly. All allies gain 15% CC and 30% CD when he is the Leader, so it all depends on how you plan to use Sidious. Finally added Offense is never a bad idea on any character who utilizes CC & CD enhancements from mods.

Darth Sidious was one of my first 7-star characters in Star Wars Galaxy of Heroes back in the days before mods (this makes me feel old…), and his abilities can be enhanced significantly with mods. Use of a Speed or Critical Damage set are both good choices for Sidious, however the Omicron really makes the use of Speed mods much, much higher. Thus, here are my recommendations for the best mods for Darth Sidious:

Revised by LJ in December 2021

how about Sidious under Nihilus lead?