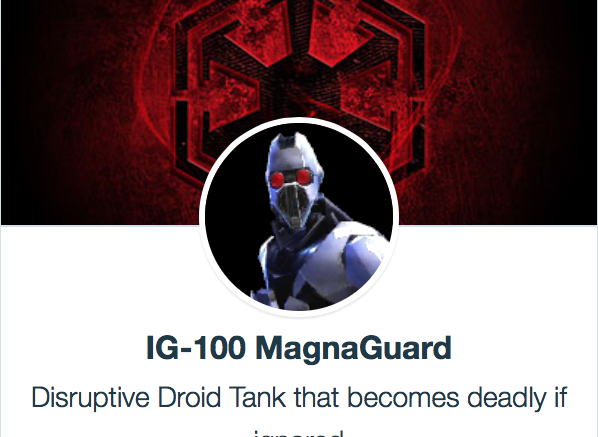 Welcome to the Best Mods for IG-100 MagnaGuard – the latest article in our series about the popular game Star Wars Galaxy of Heroes where we take a look at the best mods for each SWGoH character. While I do not claim to have all of the answers in this game, I do my research and have used every toon I write about extensively. These are mod recommendations and they are certainly not the only option. However we look to help players maximize their characters in SWGoH and we are always open to feedback if you have a mod setup that works well in your own gameplay. 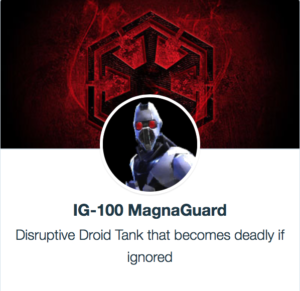 Today’s toon is the disruptive Droid Tank, MagnaGuard who “…becomes deadly if ignored” – sounds like my wife… A look at his kit shows that his basic attack, Electrostaff Assault now reads “Deal Physical damage to target enemy with a 70% chance to inflict Target Lock for 2 turns. If target was already Target Locked, MagnaGuard dispels all debuffs on itself and another random Separatist ally.” His special Disruption is a physical AoE attack which now dispels all debuffs on all Separatist allies and grants him and General Grievous Speed Up for 2 turns. His new special dispels buffs from his enemies and finally, his unique Relentless Assault gives MagnaGuard even more Counter Chance while boosting General Grievous and MagnaGuard with a 20% Tenacity and 20% Defense gain for each Target Locked enemy.

Main Mods Focus: Survivability. In Mothman’s original MagnaGuard mods guide in November 2017 he wrote “like all the early release droids MagnaGuard is crying out for a Zeta upgrade, but until then he can make a useful tank in Dark Side Territory Battles for those who have him geared and could fill a good defensive spot in Territory Wars for those in sub 100m GP guilds.” Well now that he has an added special attack and Zeta upgrade to his unique, his effectiveness has increased dramatically, especially in a Separatist Droid squad led by Grievous. The main area of focus on the MagnaGuard is survivability, which is typically defined in SWGoH as Health, Protection and Defense, but can also include Critical Avoidance for the MagnaGuard. Since Magna is going to taunt when it uses an ability during his turn, you want to load up on these stats as much as possible to keep him alive to support his Separatist Droid teammates.

Additional Areas to Focus: Speed, Potency, Tenacity & Offense. Potency is a key stat to improve for the IG-100 MagnaGuard given his basic and new special, Stunning Strike, both rely on Potency to ensure the debuffs he can inflict will stick. Big Speed secondaries are always great to have, and given IG-100 is one of the game’s slowest characters you will have a lot of ground to make up. Tenacity is a stat to focus on to ensure IG-100 does not get Ability Block or Buff Immunity over his head. Extra Offense will help his damage output, as will added CC and Critical Damage, but getting more Offense from the secondary stats is a better route since the triangle mod will have a survivability-focused primary stat.

In-game Mod Recommendations: Health & Potency is what the in-game tips said right after Mods 2.0 were introduced and it now reads Tenacity after the rework. If this were the B2 Super Battle Droid I would be on board completely, but while I see Tenacity as important, I see other areas (survivability and Health) as more important and gameplay is proving this point.

IG-100 MagnaGuard is a work in progress like all of the newly-polished Separatist Droids, so these recommendations may get some small updates in the coming weeks. Here is what I would suggest as the best mods for the IG-100 MagnaGuard: